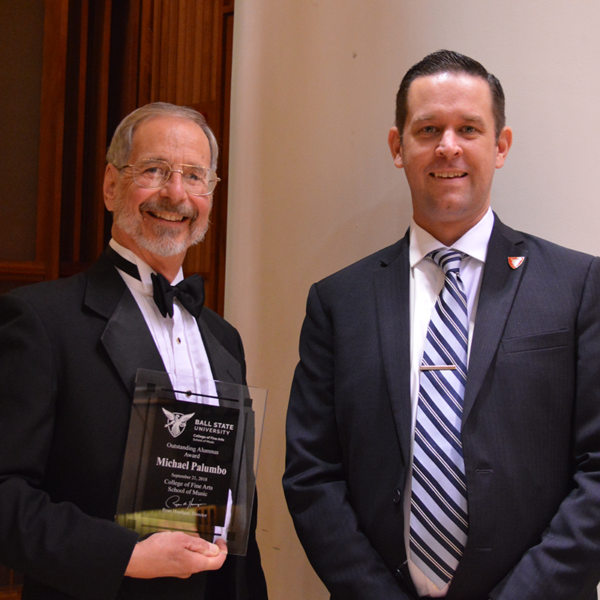 Dr. Michael Palumbo received the Outstanding Alumni Award at this year’s Showcase. He is the music director and conductor of Chamber Orchestra Ogden. Dr. Palumbo is professor emeritus at Weber State University, where he was the director of orchestral studies and professor of viola for 31 years.

After the Showcase concert, we had the pleasure of interviewing Dr. Palumbo. Below are some interview highlights.

I finished in ’81 and most of campus is not recognizable. It is nice to come back to a familiar place. I would have never encountered Ball State if I was not conducting during the summers stock theater in Hagerstown, Indiana. I would pack my things with my family and come to Hagerstown every summer. One summer I happened to run into Ball State University and that is where I pursued my doctorate in Orchestral Studies.

On what drew him to music

My grandfather was a concert violinist and studied at Prague Conservatory with Antonín Dvořák. So there was no question that I was going to play the violin, and so I did. Not as successfully as my grandfather would have liked, but I was just a kid and had other things. I never really seriously considered to not play. In college, I started studying viola because there was a quartet that needed a violist. By 1979, I had completely given up playing violin.

On how Ball State teachers impacted his education and career path

The professors were really good, really difficult, didn’t fool around or take any nonsense. I loved it and I worked my butt off. They prepared me by not being “Oh well that was pretty good,” but with “Nope, that can be better”. That is the same teaching I like to do. They were never mean, very demanding and driven. I am really grateful to the school for the opportunities I had, grateful for Robert Hargreaves. He gave me the opportunity to run the orchestra program and allowed me a double area of performance; [he] didn’t just do it for me. [He was] very accommodating to the other doctoral students I knew.

On what he enjoys doing outside of music

I am still involved with the President of Musicians Union and Viola Association. I love to make wine and cook Italian food because it is part of my heritage. I also like to make Chinese food, after being immersed in the culture when I taught in Shanghai in 2008 for 4 months with my wife. I like to read but, can’t sit still long, never have been able to. I also study Italian, just because it’s interesting to me.

Life is too much fun to just sit; too many things to do.

First piece of advice is to conduct anything, anyplace you can. It doesn’t matter if it’s a wind sextet that doesn’t even need conducting or a local junior high school choir, even if you are an instrumental conductor. Learn how to conduct. Anyone can teach anyone to wave around a stick. Being able to conduct means rehearsing, and that’s what you need to learn to do. Learn to rehearse. The only way you learn to rehearse is by practicing it and listening to people and what they have to say about how you rehearse. How do I make this better? Be able to answer that question for yourself and your musicians. Study scores that you think you’ll never conduct; study scores that are too easy, study scores that are too hard; you never know when an opportunity to stand up and do it at the last second will arise. First time I conducted for Valley West was the Nutcracker performance.

Never say no. Say yes and learn how to do it very quickly.