Welcome back! The first day of the new semester for our students at Ball State University means a fresh start to the new year. But that doesn’t mean we’re not thinking back on the memories we made over the fall semester and all the work we put into our marching band season. The Pride of Mid-America had a blast creating six unique performances for and were so excited to stir up the crowd whilst cheering on our Ball State Cardinals from the stands. Dr. Harmon, Director of the Pride of Mid-America recalls on the season, “This year was a great first step towards growth for this group. I am excited about the opportunities we have here at Ball State University, and we have some big plans for the future of this organization. Next season we aim even higher, so make plans to catch each halftime show next year!”

One of the biggest parts of marching band is Mother Nature; sometimes she’s on our side, and sometimes she likes to play games. Dr. Harmon must have made a deal with her this year because the weather was beautiful all season! However, that deal must have expired on November 15. Our final game was cold, cold, COLD! But as always, it’s our job to bring the hype, and through the snow and freezing wind, that’s exactly what we did. 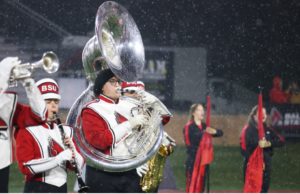 The Pride had some amazing music arrangements this season! The music was so good, we couldn’t help but break out in dance during the show! We made a habit of adding dance to each of our performances and even invited some people to join us. Code Red and Royal Elite collaborated with the Pride for our Homecoming performance. “I really enjoy whenever Code Red and the Royal Elite come by during rehearsal because we can see how our music connects with their dance moves…I think the best part is when all the groups combine, and the band learns the dance from Code Red and we all just have so much fun learning the moves. And we’re amazed by a simple head nod. This is something that I hope POMA continues and I look forward to all the future performances!” says Nataly Rivera, senior clarinet player. 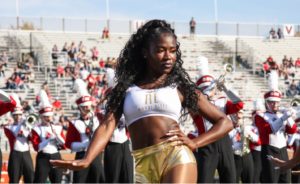 The end of the season is an emotional moment, and one of our many traditions includes coming down on the football field after the game to soak up some of our final moments as a band before we depart and head home for the holidays. This is an especially special moment for the seniors, as they lead the singing of our beloved Alma Mater and the dismissal. Senior drum major Rory Sullivan reflected on her feelings as her final Game Day was wrapped up.

“After the final game, I felt a mix of emotions. Grateful that I had the opportunity to make music with my favorite people, sad that I wouldn’t be able to work with them again, so happy that I made so many memories in the band, and kind of shocked that it was all over and that I might never be back in Scheumann again,” she said. “Leading the Alma Mater and the dismissal is pretty surreal. You watch other people do it when you’re a freshman and then you get in front of the band and think ‘Woah. I made it.’ It’s pretty crazy!” 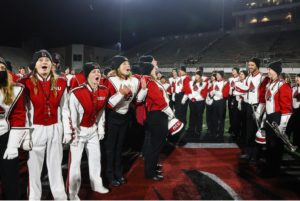 Even though the season was wrapped up, our spirit wasn’t! Our end-of-season banquet, which took place December 4, is an annual tradition dating back to the start of the Pride of Mid-America. This is one of the few chances we all see each other out of our uniforms or practice clothes. With everyone all dressed up and relaxing in the Alumni Center, we laughed and enjoyed each other’s company while celebrating our success. After a wonderful dinner and hilarious slideshow highlighting some of our favorite moments, Dr. Harmon stepped up and presented a variety of awards to honor students who had showed immense leadership skills throughout the season: 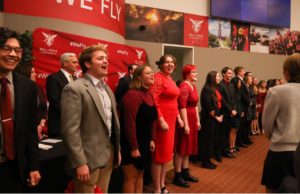 Our season is over, but that doesn’t mean you’ve seen the last of us! You can catch us again as members of the basketball ball pep band at all home games for men’s and women’s basketball ball games. Just look for the Charlie Cardinal hockey jerseys (hands down the BEST uniform in the arena 😉 )!

Additionally, be sure to check out all our social media to see us in action, learn about our graduating seniors and get updates about the future season and auditions.

Thanks for sticking around with us this year. We’ll catch you later over at Scheumann Stadium! As always, Chirp Chirp! and Go Cards! 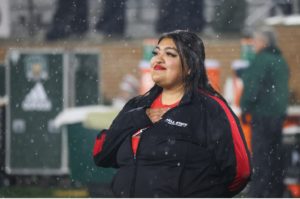 Photos by: Jennifer McGowen & the Pride of Mid-America Marching Band 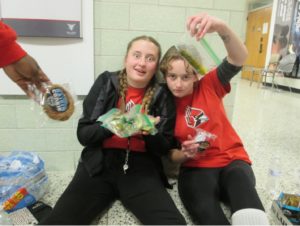 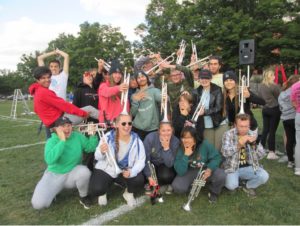 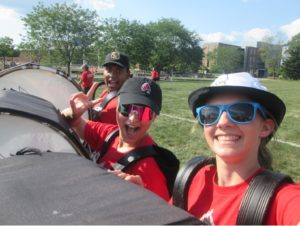 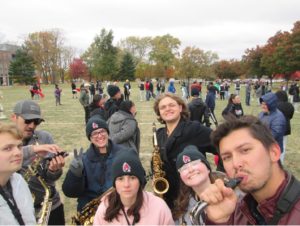