As the Pride of Mid-America wraps up another month, we are so excited to continue to practice and perform for our supporters and fans! This past month was full of exciting events and games for POMA.

The month started strong as the Pride of Mid-America performed their “Americana” show at the Ball State vs. The Army football game on October 2nd. The “Americana” halftime show featured tunes “Military Escort,” “Yankee Doodle,” and “America the Beautiful.” After halftime, a few members of POMA even got to meet and hangout with the Army Band!

Finally, the Pride of Mid-America ended the month with their 2nd annual Showcase event on October 24th. POMA and their amazing audience were flexible with the weather changes and started off their Showcase performance underneath the bleachers in Scheumann Stadium. Safe from the rain, the woodwinds started the Showcase off with their section feature of “Basketcase.” The high brass followed with their feature performance of “Confident” and low brass performed “Theme from Spider-Man.” The color guard also performed a dance routine to “Crazy Train” and the drumline performed one of their new cadences called “Trubdub.” At the end of the section features, children five and under were invited to conduct with our three Drum Majors: Anna Fink, Casey Mitchell, and Rory Sullivan. The band performed an excerpt from “Hound Dog,” which is also an excerpt of their upcoming show, as our special guest conductors conducted with our Drum Majors!

After the section features, the Pride of Mid-America took to the field in Scheumann Stadium and performed their well-known Pregame show. This special Pregame performance featured a few special guests. Marching along with The Pride were a few 2020 season seniors: Martha Robison, Justin Russell, Bethany Sloniker, Bryce Styles, and Derek Varner! POMA was so excited to welcome back their alumni members and have them march once more especially since they didn’t get this opportunity last year. The Showcase ended with the performances of two halftime shows. The “Americana” show was performed first and was followed by the “Celebrate!” show. POMA celebrated the continuation of their season and all the fans that came out to support us!

We would like to thank everyone who supported our event and supports our work! The support we receive as well as the dedication from our members is what allows us to continue to do what we love: perform and play with the people that we love. As we continue our season, check out our social media, provided below, to see updates about our ensemble, including information about our next show that will be debuted at the November 17th football game! Chirp! Chirp! And Go Cards! 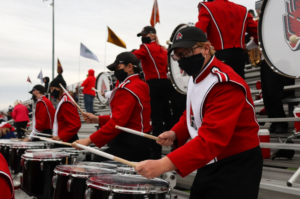 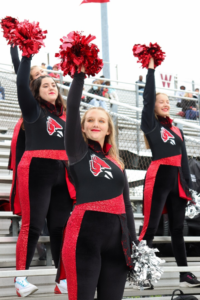 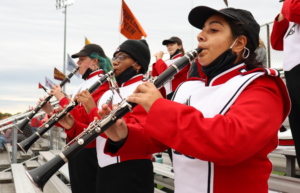