As another month comes to a close, we are so excited to reflect on all our activities from November! From supporting the Muncie community to cheering on the Ball State football team to premiering a new halftime show, we have had an enjoyably active month.

We started off the month by collaborating with the Muncie Animal Rescue Fund (ARF) for our third halftime show of the season, “Who Let the Dogs Out?” During this collaboration, on November 6th, the Pride of Mid-America volunteered at Muncie ARF’s shelters by raking leaves, walking dogs, and giving many cuddles to the animals. We also endorsed a ticket link for supporters to purchase football tickets for the November 17th game day. When supporters bought from this ticket link, a portion of the proceeds went back to Muncie ARF so they can keep helping the Muncie community!

On Wednesday, November 17th, the Pride of Mid-America Marching Band debuted their halftime show of “Who Let the Dogs Out?” as Ball State hosted Central Michigan in Scheumann Stadium. POMA was proud to not only be supporting the Ball State football team throughout the game, but also supporting Muncie ARF as we showcased their work through our halftime show. “Who Let the Dogs Out?” featured tunes of “A Hard Day’s Night,” “Atomic Dog,” “Hound Dog,” and “Frisbee Catchin’ Dogs Medley.”

POMA performed at our last home game of the season on Tuesday, November 23rd as Ball State hosted Buffalo. In honor of senior night, the senior members of the ensemble were announced during their halftime show before they performed their senior tune of “Malagueña,” a tune that originates from their first halftime show as members of the Pride of Mid-America Marching Band. POMA is so proud of all thirty seniors for all their time and dedication that they have put forth to the ensemble! POMA enjoyed celebrating the end of Senior Night as they played the Ball State Victory March and Fight Song as Ball State won against Buffalo.

Although November has come to a close, our season has not! POMA will hold their annual banquet on December 5th to celebrate all the achievements of the Pride of Mid-America and to recognize outstanding students within the ensemble. Along with the banquet, the Ball State football team will be finding out whether or not they will be heading to a Bowl Game on December 6th! No matter what, POMA is proud to support the Ball State Football Team wherever they go. Be sure to keep up on all our activities, including more information regarding the end of the season, by following our social media, provided below. As usual, Chirp! Chirp! And Go Cards! 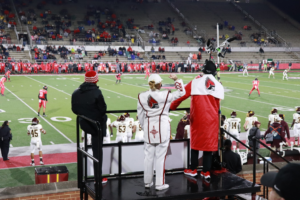 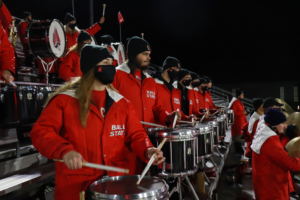 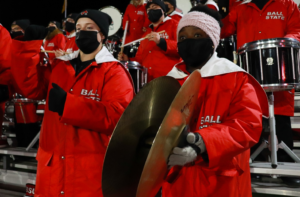