If you found yourself on campus the week leading up to classes, you probably heard the oh-so familiar sound of a metronome ticking on Lafollette Field, or maybe even the sound of piccolos on the Quad. With another year of Early Week in the books, the Pride of Mid-America is so excited to show you what we’ve got!

This is the first year since President Mearns lifted the coronavirus restrictions. Last year, after we tackled face masks whilst playing our instruments and social distancing during fundamentals practice, it’s safe to say that The Pride is happy to return to its normal events and festivities.

Starting on Saturday, August 13, we were officially introduced to our newest director, Dr. Jeremy Harmon. An excerpt from his bio published on his website reads:

Dr. Harmon expressed his excitement on his arrival to BSU. “Coming to Ball State to join The Pride of Mid-America has been a great opportunity for myself and for the continued development of this program.  I can see through the hard work of these students we will be able to work together to elevate this program into something special, not only in the MAC, but on a national scale.  I want to provide our students with experiences around the country through performances and outreach.  It is an exciting time to be a Cardinal!”

His arrangements for The Pride’s halftime shows are sure to draw in a big crowd, so you’d better grab a seat at Scheumann Stadium before they run out!

A combination of hard work and good times made for a momentous week! Within the first three days, we were able to learn and memorize all of our pregame performance, as well as learn and begin memorizing our halftime music. 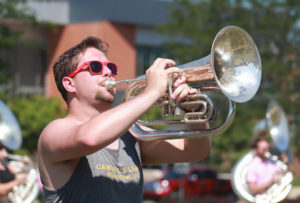 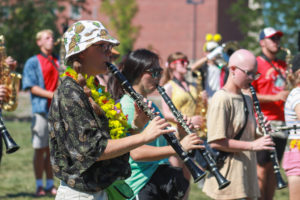 Per tradition, each day was embedded with exciting activities and dress-up days organized and hosted by Addison Miller, the head of the Event Planning Committee. From the famous scavenger hunt to an impromptu game of kickball in the dark, it was never a boring evening for POMA!

“I really loved all the activities, but my favorite was probably the scavenger hunt. It really gave me the time to get to know people outsides [of] my section and make some new friends!” stated first-year tenor saxophone player Liz Walden.

Thanks to Addison’s efforts, each of the band sections were able to spend lots of quality time together during meals. For example, the saxophones hung out with the percussion and the sousaphones vibed with the color guard, giving everyone the opportunity to introduce themselves to each other, as well as enjoy time with all our other friends outside of our own sections. Drum Majors Rory Sullivan, Abby Fleck, and Alivia Pello added their own memorable touch to Early Week by standing on the chairs in the middle of dinner and leading the entire dining hall in a daily cheer of the Fight Song!

POMA Pals, coordinated by Faith Young and Ethan Atterson, went just as smoothly! Starting Monday evening, each incoming POMA member was able to meet up with their Crowd Leader and were able to play games to celebrate the start of the band season and foster new relationships in POMA. Each Crowd Leader had a blast taking first year students under their wing and showing them the ropes! 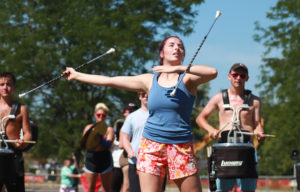 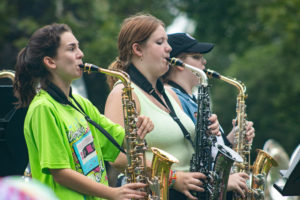 As the semester starts up for Ball State, the Pride of Mid-America wishes all its members good luck on their classes and would like to remind them that we are so proud of all their hard work on and off the marching field.

September 10 marks the official debut of the 2022 Pride of Mid-America Marching Band. Come out and catch our pregame and halftime performances as well as some rocking stadium cheers as the Ball State football team plays Western Michigan! Remember to keep up to date with us by following our social media, listed below. We can’t wait to show you what we’ve got!

We’ll see you at Scheumann Stadium! As always, Chirp Chirp! And Go Cards! 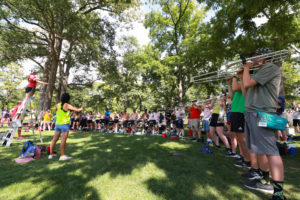