We’ve officially made it through Game Day! The Pride of Mid-America was so excited to show off all their hard work this month for the September games. Even at an 8 a.m. call time for rehearsal, there was nothing but smiles and cheers as we got ready for our debut at Scheumann Stadium.

If you’ve been paying any attention to our social media, you’ll find some pretty exciting photos. Maybe they’re a little blurry, maybe they’re a little dated, but they mean the world to us! Our annual Digital Camera Project made its return this season and we’re totally here for it! Two digital cameras (remember those??) were passed around the different sections of the band for them to do whatever they liked with. Check out our Instagram and Facebook to see the fantastic memories made by our very own band members!

This season, we introduced a new part of our performance. A short parade was organized and sent us on a route that sent the band up Bethel Avenue, where we entered the stadium at the entrance by the Alumni Center. It was a pleasant surprise for those participating in the tailgates. For about an hour, the Pride brings the hype with our University’s fight song and iconic tune, “War!” This is the new norm for POMA, so make sure you find a spot to catch us! 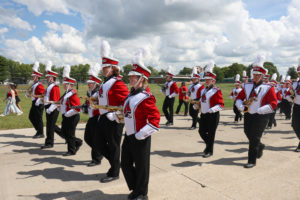 “I really didn’t expect to love playing at tailgates as much as I do! The vibe is incredible, and it’s probably one the best parts of game day!” said first-year trumpet player Nathan Klopfenstein.

September 10 was the first official home game for the Cardinals, and it was a hot one! With temperatures up in the mid 80s, the band persevered and gave a fantastic pre-game performance before heading up to the stands to enjoy the game and entertain the crowd with brand-new stand tunes that we have just been dying to show you! Our personal favorites were “The Mandalorian” from the hit Disney+ show The Mandalorian and “Industry Baby” by Lil Nas X.

Our halftime show had everyone on their feet! With a setlist composed entirely by female artists, it was so exciting to see the crowd get into the music. We started the show with an arrangement of “Kings & Queen” by Ava Max, then performed “About Damn Time” by Lizzo, and “Boyfriend” by Dove Cameron.

Even though BSU lost to Western Michigan 37-30, the Pride always wins!

Of course, our band members could not be successful without the support of our fans and family! Before the September 17th the big game, POMA was able to rehearse for their friends and family to show everyone how they get hyped for game day! 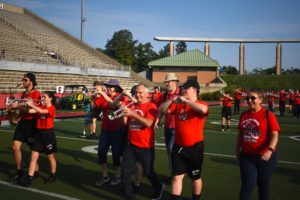 Family and friends watched The Pride perform their show with the week’s addition of “A Million Dreams” from The Greatest Showman to feature our wonderful color guard. The show was well received by the entire crowd and we were so excited to show off our work to our families. On top of an already wonderful performance, POMA was able to play the Victory March for Ball State’s fantastic game against Murray State! The 31-0 win was the perfect way to end an amazing Family Weekend.

With October in full swing, the Pride is gearing up for their performances for the upcoming month. Homecoming, which is easily the best part of the season, is Oct 22, so make sure you catch us at the Homecoming Parade and grab a good seat at the game.

We can’t wait to boogie with you! As always, Chirp Chirp! and Go Cards! 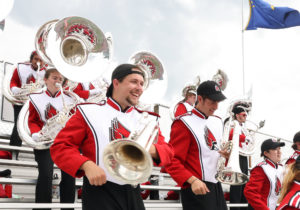