Another month, another great set of football games for the Cardinals! And an even better month for the Pride of Mid-America! We’ve been working extra hard to give our audience the best performance and we think we maxed it out this time.

On October 1, the Pride revealed Part One of our Homecoming show. In alignment with this year’s Homecoming theme, “Chirp Chirp Fever!”, we performed a variety of songs that every Boogie Bug could recognize! With music like “Boogie Wonderland” by Earth, Wind, and Fire, “More Than A Feeling” by Boston, and “Living in America” by James Brown, the crowd really got to see us shake it!

Up in the stands, we kept the party going with our favorite stand tunes. The sun turned our cheeks a rosy red as it shone bright throughout the entire game. The bark of the Northern Illinois Huskies had nothing on BSU’s mighty chirp! A double overtime game was just what we needed to surpass our opponents and take the game! With a winning score of 44-38, the Pride was ecstatic to get back to rehearsal for the next game.

A brief hiatus brought us back refreshed and ready to keep pushing! On October 15, the Pride of Mid-America was joined by United Sound to bring the hype in the stands! At half time, United Sound was able to come to the front lines of the field and cheer us on! We strongly appreciate their help in helping us bring the hype and get the crowds excited! We faced another herd of Huskies, this time from the University of Connecticut, and maintained a beautiful winning streak in our last quarter 25-19!

“My favorite part of Game Day is probably being in the stands and bringing a lot of energy to everyone! It’s a lot of fun cheering on the team while also playing music!” says second-year bass drum player Nathan Christensen. “What gets me the most hype is when a big play happens on the field! I love watching football so when something like that happens, I can’t help but get excited.” 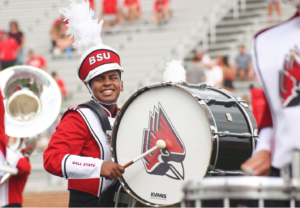 Quite possibly our biggest game of the year, Homecoming, was nothing short of a success! We spent our entire week prepping for the game and sharing the fun with all of Muncie. From the Bed Races to the Homecoming parade to dancing with Code Red and the Royal Elite, our week was PACKED with good times!

We want to offer a huge shoutout to Code Red and Royal Elite for joining us on the field as we played our hearts out for the crowd. We jammed with them to the tunes of “War,” “Kings & Queens” by Ava Max, and “Physical” by Dua Lipa. 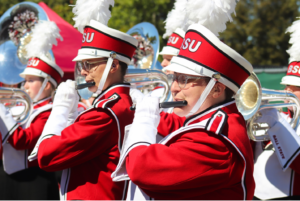 It doesn’t matter if the Cardinals lost to Eastern Michigan 16-20 because the Pride is always there to bring the hype! We were on our feet, dancing, cheering, and having a great time as the Cardinals fought a hard battle.

With one more game on our radar, POMA has one more show up their sleeve. We can’t wait to show you what we have in store.

We’ll see you one last time at Scheumann Stadium on November 15! As always, Chirp Chirp! and Go Cards! 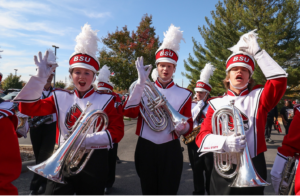 Photos by: The photographers of POMA