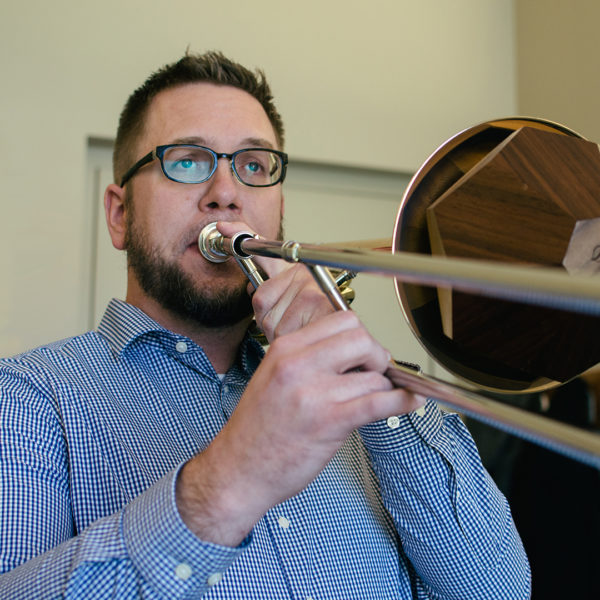 Chris Van Hof is a Grand Rapids native and assistant professor of trombone.

“My mom was a music teacher, organist, and choir director, so I was always around music. I initially wanted to play double bass, but mom had an Oldsmobile Cutlass Calais and the bass wouldn’t fit in the trunk, so I settled on trombone after going to my older brother’s high school band concert (I thought the trombones looked cool). My family are all teachers, so I think that’s always been in my blood. It is a thrill as a trombone professor to work with both brass and jazz colleagues who are top-notch. And to see my students adopt the mindset of a professional musician as early as freshman year is exciting to me.”

“I love brass music from the Paris Conservatory and France. I have long loved the Tomasi concerto, as it is one of the most colorful and engaging 20th-century concertos for trombone. Since it is so familiar to me, preparing has been like meeting up with an old friend–we just picked up where we left off last time. I have never played it with orchestra though, only with piano, so this will be a thrill! The orchestration is gorgeous. The first movement is, to me a sweltering, humid countryside day where being languid and eating cheese and nicely chilled white wine is priority number one. The second movement is my favorite: it’s like a hazy dream of a 1920s jazz club, remembered with regret and melancholy. And the third movement is, quite simply, a bustling Parisian street, maybe the circle drive around the Arc d’Triomphe. And listeners new to the piece should know that the very first opening motif in the solo trombone contains the entire universe of the remainder of the piece. Everything that follows comes directly out of that opening flourish, which is a stroke of compositional genius.” 📸: @jkwcreative