The Pride of Mid-America (POMA) Marching Band is thrilled to return for their 2021 season! After returning to a typical Early Week schedule in August, we are excited to support the Ball State Football Team and continue to perform at games this season!

POMA returned to Ball State’s campus a week before class started so they could begin their Early Week rehearsals! During Early Week, POMA members learned marching technique, practiced show music, marched drill, and participated in fun after-practice activities, such as the annual scavenger hunt, POMAlympics, Charade’s night, and so much more. By the end of Early Week, POMA had all Pregame drill as well as most of their halftime show drill, “Celebrate!” on the field.

Since the marching band is back to a typical football schedule, POMA returned to Scheumann Stadium on Thursday, Sept. 2 for the first time in two years for Ball State’s first football game of the season! At the game, POMA performed their halftime show, “Celebrate!”, a show about enjoying what you love to do. For POMA, that means making music together. For the show, we play celebratory pieces, featuring “Water Me” by Lizzo and “I’m Still Standing” by Elton John. The game ended in a special celebration, as Ball State won their first game of the season against Western Illinois!

Mark your calendars for the next game on Saturday, Sept. 25, as Ball State hosts Toledo at Scheumann Stadium! As we take to the field for Pregame and halftime, we would love to see all our supporters and fans in the audience. Remember to follow our social media, listed below, to stay up to date on all of POMA’s activities, including announcements about our future halftime shows and information regarding our October band showcase! Chirp! Chirp! and Go Cards! 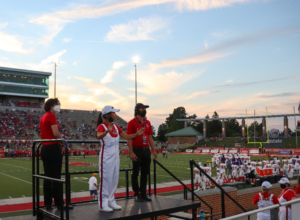 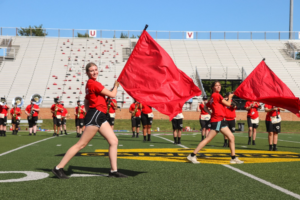