It is once again that time in the season where the Pride of Mid-America ensemble members must return their instruments and flags while reminiscing about the memories that they created in this very peculiar season.

At the end of the season, the Pride of Mid-America was able to play at two games in November! The first game that the band got to support the Ball State football team at was on November 11th and was against Eastern Michigan. The second game that the band got to play at was on November 18th against Northern Illinois. POMA was proud to play the Ball State victory march and fight song for the football players to sing along to after they won both games as well as the bronze stalk trophy! Go Ball State!

For POMA, especially our four-year members, this was a year of dedication to the ensemble. Although we did not have as large of a group as we normally do, we still had a strong number of 187 ensemble members. Even though the recent events may have prevented some members from attending rehearsals, performances, and games, the Pride of Mid-America was happy to be able to continue what they love to do: play music.

The marching band season wrapped up on November 22nd with a socially distanced band banquet for the seniors. Although only the seniors and staff could attend the Alumni Center for the awards ceremony, the rest of the band and families of the ensemble were invited to view the ceremony via Zoom.

The band banquet began with Dr. Hand welcoming all virtual guests and seniors to their final band banquet. Dr. Stuart Ivey, who filled Dr. Hand’s position while she was on leave, gave a moving speech about his time in the Pride of Mid-America. Dr. Ivy advised the senior class to  “keep living your life with the same fervor that you made it through the season.” After Dr. Ivey finished his speech, Drum Major Bryce Styles, the chosen senior speaker began his speech by reminding the senior class that “It’s not about the destination, it’s about the journey.” Bryce Styles reminisced with the seniors about all of their favorite memories, including playing at the Northern Illinois game their freshman year, traveling to Notre Dame their sophomore year, playing at Lucas Oil twice in their time in POMA, and completing their final season during all new circumstances due to the pandemic.

Finally, the seniors were announced by name, and one-by-one, they were able to get their coveted Pride of Mid-America blanket. After each senior received their blanket, the awards for outstanding members were passed out. Gaby Fisher received the award for Outstanding Color Guard Member and Chris White received the James Lane Percussion Award. The Richard Dunham Outstanding Member Award went to Katelyn Warner and the Outstanding Leader Award was given to both Natalie Raffelock and Ben Przybylski. The banquet then closed with the recorded singing of the Alma Mater by the Ball State’s Men’s Choir.

Although the season was not the normal season that we had expected, the Pride of Mid-America is happy to have continued performing and supporting our football team and the Muncie community these past few months. We wish our seniors the best of luck and hope to see returning and new members next year! Remember to keep up with POMA and follow our social media, provided below. Chirp Chirp and Go Cards! 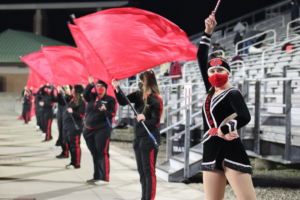 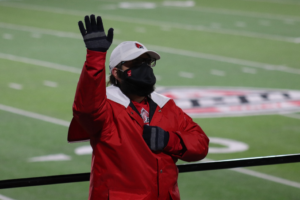 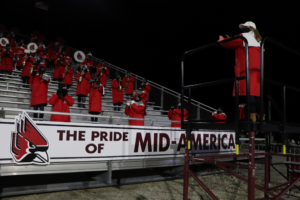