The Pride of Mid-America would like to thank all our supporters who were able to make it to our showcase concert on Oct. 17! Although this season has been very different compared to previous seasons, we are still thankful for all the support we receive from our wonderful fans.

With the uncertainty of the season, POMA members continued to rehearse in preparation for potential football games after the showcase concert. Wind and Brass members have been working diligently on stand cheers while the drumline members have been working on drum cadences, including a new cadence that they wrote themselves. Finally, the color guard has been rehearsing their pregame flag work to prep for a potential halftime performance. With all this work being put in during rehearsals, we were happy to hear the following announcements about the football season.

The Pride of Mid-America is proud to be supporting the Ball State football team during their home games on Wednesday, November 11th, and the following Wednesday, November 18th! Although the entire marching band cannot attend these games at the same time, half of the band will be at each game. So, mark your calendars and turn on CBS Sports Network to catch a glimpse of the Pride of Mid-America! The seniors of the ensemble have picked out special tunes, including show tunes from our Superhero show last year, to play during the games. Be sure to watch out for a halftime performance that features POMA’s color guard and drumline!

POMA is grateful for the opportunity to be supporting the Ball State football team once more, so remember to follow our social media, listed below, to stay up-to-date with all of POMA’s activities and to receive information about the upcoming games! We hope to have everyone’s virtual support as we face Eastern Michigan in our first home game of the season. Chirp Chirp and Go Cards! 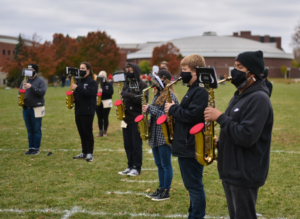 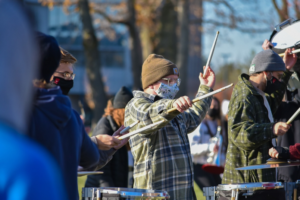 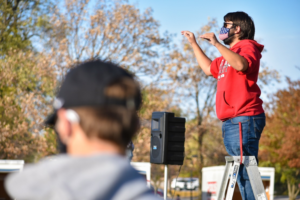