This past Saturday was a socially safe, fun-filled day for the Pride of Mid-America Marching Band and Ball State’s Spirit Squad, Code Red! Because of the postponed football games, a showcase event was held on Oct. 17 to show the Muncie community all that the Ball State marching band has been working on. The event was open to the community, with all attendees required to wear masks and remain socially distanced.

The showcase performance began at 3 p.m. with the Pride of Mid-America Marching Band performing the Star-Spangled Banner conducted by the Director of Bands, Dr. Thomas Caneva. After that, POMA performed a standstill performance of their traditional pregame music, including the tunes of the Ball State fanfare, Ball State fight song, Back Home Again in Indiana, and the Ball State Victory March. Following the pregame standstill performance, POMA exited the field to give various sections of the ensemble a chance to perform their section features. The sousaphone and saxophone sections performed “Hey Baby” and the drumline performed a cadence that was composed by one of their senior members, Chris White. The trumpets and mellophones played the tune “Let’s Groove” and the baritone section played Green Day’s “Basket Case.” In between section features, Code Red performed an outstanding dance routine. Code Red normally performs alongside the Ball State Marching Band during football and basketball games, so it was wonderful to collaborate with them once again! The Pride of Mid-America’s Color Guard members finished off the section events by performing a routine to “In This Shirt” by the Irrepressibles. Senior color guard members Gaby Fisher and Hannah Turek had the color guard show commemorate their favorite moments in POMA.

After the section features, Code Red dance routine, and the color guard performance, the Pride of Mid-America Marching Band took to the field again to perform their “70s flashback” show. The show featured hit tunes such as Bicycle Race, Boogie Shoes, Disco Inferno, Dancing Queen, and Joy to the World. Although the marching band has been rehearsing separately from the color guard, the color guard and Code Red were able to perform alongside the marching band once again in their last tune, Joy to the World. After the 70s flashback show, senior members of the ensemble were recognized at the front of the field. Following the senior recognition, POMA performed the Alma Mater together, conducted by Ryan Hourigan, the Director of the School of Music,  and ended the showcase by having the seniors play the Ball State fight song, followed by the whole band joining in to play.

Although the Pride of Mid-America Marching Band’s season was much different, and shorter, than previous seasons, we are proud to have had the opportunity to still perform for the community and showcase what we have been working on. We are proud of all the hard work POMA members have put in and are thankful to continue our traditions. To stay updated on our events and activities, remember to follow our social media, listed below, and keep an eye out for updates regarding the upcoming football season. Chirp Chirp and Go Cards! 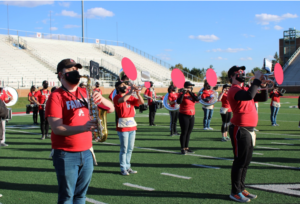 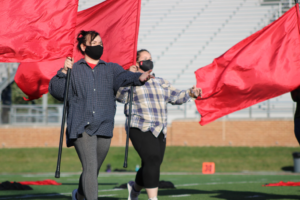