It is that time of year again where the Pride of Mid-America Marching Band turns in their uniforms, tapes up their flags, and covers their drums as the season closes. Although the season is over, there is so much to be remembered.

POMA’s final game of the season was on November 29th. Despite the game being on a school break, POMA band members showed up to rehearsal before the game with high spirits and smiles on their faces. The marching band maintained their energy throughout the game day and performed a shortened version of their “Swing” show during halftime. The Pride of Mid-America seniors got recognized during halftime and the entire ensemble performed the senior song choice of “Thks fr the Mmrs.” POMA was proud to support the Ball State football team on their last game day and their last win of the season. After the game, the marching band members gathered together and sang the Alma Mater one last time with the seniors.

On Sunday, December 8th, the Pride of Mid-America Marching Band had their annual band banquet. The band banquet is a semi-formal event that thanks the marching band members for all of their hard work throughout the season. At this year’s banquet, POMA heard speeches by Kevin Gerrity, the Associate Director in the School of Music, and by Joe Scagnoli, the Director of Band Emeritus, who both expressed their appreciation and thanks for all the hard work POMA has put in to this season. Following the guest speakers, senior speaker Maya Montague gave a heartfelt speech of her past memories in the Pride of Mid-America Marching Band. After the speeches, Dr. Caroline Hand recognized all faculty, student leaders, Drum Majors, Graduate Assistants, and student crews that help make the Marching Band run. We would not be able to achieve what we do without the help that we receive from all of our faculty and students! Lastly, Dr. Hand and color guard instructor Rhonda Reynolds gave out their awards. Adam Beaupre received the James Lane Percussion Award. Brianna Hunt received the Color Guard Award. The Richard Dunham Outstanding Member Award was given to Caroline Meister. Lauren Verdura received the Outstanding Leader Award.

The band banquet is a time for sharing memories, wrapping up the season, and saying goodbye to our band family. The banquet ends with recognition of every single band member as Dr. Hand reads everyone’s name aloud. The Fourth year members of the ensemble receive their coveted band blanket, as a thanks for their hard work and dedication to the ensemble. Congratulations to all of our award winners and fourth year members! We wish the seniors the best of luck in their years after graduation.

Although the season has ended for our seniors, the Pride of Mid-America Marching Band hopes to see returning and new members bright, smiling faces for next years band camp in August 2020! Remember to keep up with POMA and follow us on social media, provided below. Chirp Chirp and Go Cards! 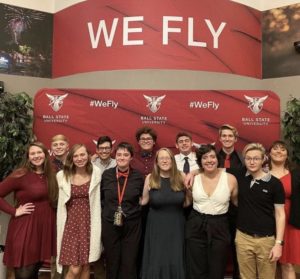 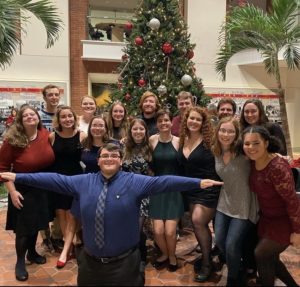