Although the season is coming to a close, it is not over yet for the Pride of Mid-America Marching Band! Through sunshine and snow, the marching band will always be there to support our Ball State football team.

On November 16th, POMA premiered their new “Swing” show. This show features classic 1940s tunes and the color guard showed off their dancing skills. Fans at the game were able to witness the marching band create various forms, including a train that moved across the field! The Pride of Mid-America Marching Band pushed through cold rehearsals and performed an outstanding show on Saturday.

The Pride of Mid-America Marching Band’s next, and possibly last, game of the season will be on Black Friday, November 29th. For this game, the seniors of the band will be honored at halftime during Senior Night. The seniors have chosen “Thks fr the Mmrs” as their favorite tune from the past four years, which will be performed during halftime after the seniors are recognized. POMA is sad to let such amazing and talented students go, but we are thrilled to see what they will do as they graduate from Ball State University.

Make sure to come out and support the Pride of Mid-America Marching Band and the Ball State football team on their last game on November 29th. Remember to keep up with POMA and follow us on social media, provided below. Chirp Chirp and Go Cards! 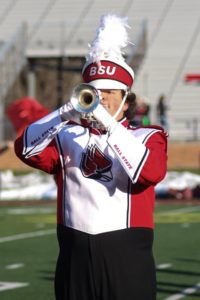