The Pride of Mid-America Marching Band is excited to wrap-up another month in their season. October was filled with exciting events for the band and we are happy to share our music with the community.

POMA started off October by hosting the Central Indiana Bands of America Regional at Ball State’s Scheumann Stadium on October 5th! The Pride of Mid-America Marching Band worked multiple positions such as concession workers, field time keepers, gate keepers, ticket takers, and so much more in order to make the event run as smoothly as possible. The marching band performed their “Superheroes” show one last time at BOA Regionals as the collegiate exhibition ensemble. The high school bands that competed in BOA Regionals were pumped up and excited to see POMA perform. The Pride of Mid-America made sure to give a fantastic performance and to encourage high school students to keep participating in band no matter where they go in their future.

On October 19th, the Pride of Mid-America hosted nearly eighty alumni for POMA’s first Alumni Band Day in fifteen years! The marching band also performed in the annual Ball State Homecoming parade. The Band debuted their new show, “Dance Party,” and their new dance moves alongside Code Red, The Ballers, and Royal Elite. The marching band was proud to play Ball State’s “Victory March” on our Homecoming win. Despite the rainy weather on October 26th, the Pride of Mid-America was not deterred and performed “Dance Party” again at the Ohio vs. Ball State game. POMA remained in high spirits throughout the game, gladly cheering on Ball State’s football team.

October was another busy and fun-filled month for the Pride of Mid-America Marching Band, and we are awaiting more fun at the next game on November 16th. The Pride of Mid-America is also wrapping up our Crowdfunding Campaign and we would love to go beyond our goal. We formally thank our donors for their support and generosity in our fundraising campaign found at crowdfunding.bsu.edu/poma. Our music plays on with the help of our supporters.

Be sure to attend the next game to see our new Halftime show with lots of 1940s Swing Music! Remember to keep up with POMA and follow us on social media, provided below. Chirp Chirp and Go Cards! 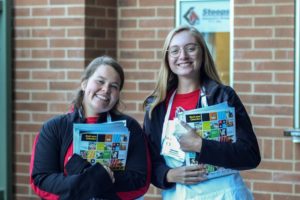 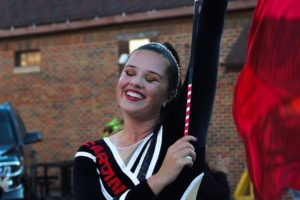