The trip to Japan was an experience I will cherish for the rest of my life. I met so many wonderful people and the students at Mukogawa Women’s University were so welcoming. The first day there, I ate lunch with some of the students and went on a campus tour. The campus was beautiful and they have great facilities. Afterwards, I rehearsed with my two piano accompanists, Noriko and Seina, and was shocked at how well they played. A translator was present at all my rehearsals, however, translation was only needed when I had many things to say.

During the second day of my visit I took a lesson from Professor Takahata, the saxophone professor. I was playing a Japanese work on my recital entitled “Mai” by Ryo Noda and felt that it would be helpful to get his insight into Japanese music and culture. He opened my eyes to a world of Japanese music I did not know existed. I was aware that the piece was based on the sounds of a shakuhachi flute. However, Professor Takahata taught me that the piece also borrowed elements of Japanese court music called Gagaku which is a very old type of music in Japan. Gagaku is performed with several different Japanese wind instruments and drums. Like Gagaku, “Mai” is an unmeasured piece and there is no defined tempo throughout the piece. The player should try their best to tell a story while playing it. An example would be a story about a samurai going into battle, as Professor Takahata told me to portray through my playing.

Later in the day I observed a class called “Teaching Methods for an Ensemble” where I played the alto recorder with three other girls. Towards the end of the class, the teacher made me teach the ensemble. I had to model for them what I wanted through conducting and they understood exactly what I wanted them to do. Teaching that class was so much fun.

The next day was my recital and it was a huge success. I performed works by Roger Boutry, Ryo Nodo, Denis Joly, Greg Yasinitsky and Pedro Iturralde. I selected these pieces because I am a big advocate for diversity and I wanted to incorporate different styles and genres for my audience to experience and enjoy.

I also played in Koshien Kaiken Hall with other students from the University. The performance was open to the public and was in a building that used to be a hotel a long time ago and then got shut down. Mukogawa Women’s University purchased the building and it’s been a performance hall ever since.

My trip to Japan was such a great experience that I will definitely go back again. The food was excellent, the people were welcoming, and the musicians were fantastic.

Kendell Fowler is a senior saxophonist majoring in music education and minoring in jazz. Kendell was one of the 2018-2019 undergraduate concerto competition winners. As a winner, Kendell visited Mukogawa Women’s University (MWU) in Osaka, Japan as part of our long-standing exchange program. 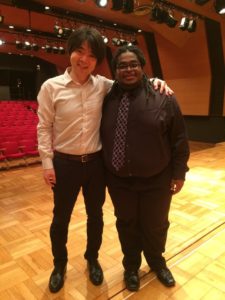