Second year jazz concentration major and pianist Tommy Schilb performed with the Jazz Lab Ensemble as well as at a reception in which Mr. Marsalis appeared. Below is a reflection highlighting his experience that momentous weekend.

“Several of the band members were on stage. I was sitting near the front rows of Sursa Performance Hall next to my friend Sam Green at 5:32pm. We were at the sound check. I turned to him and whispered “I wonder where Wynton Marsalis is at.” Sam replied, “I don’t know, he’s probably still backstage.” After many minutes of anticipation waiting for the beloved man, he finally stepped out on the stage. On his head he wore a distinct baseball cap and for a moment I couldn’t tell if it was him or not. But sure enough, it was. He counted the band off, “1..2..a 1..2..3..4..” This was proceeded by what seemed like a total of 10 second of playing time. I was astonished by how expedited their warm-up process was. And just like that, they exited the stage. Two concerts were held, one at 7 p.m. and the other at 9 p.m. I was honored to be asked to play for a special reception that was held in Hahn Recital Hall after the first concert. I arrived early, and went to sit at the piano. The room was desolate and quiet. After saying hello to only a few people in there, I began playing. Person after person started to flood into the room. The atmosphere and energy cascaded into a very warm aroma of happiness. I continued to play and suddenly a familiar face entered the room. He looked over at me and I waved at him. He pointed at me, smiled, and winked. It was a very rewarding and surreal moment and I’ll never forget it. Wynton Marsalis. What a man.” -Tommy Schilb 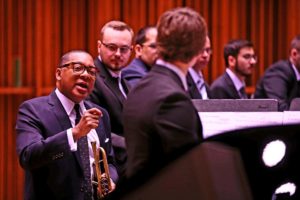 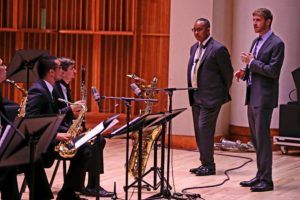 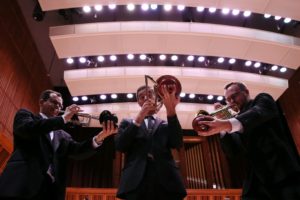 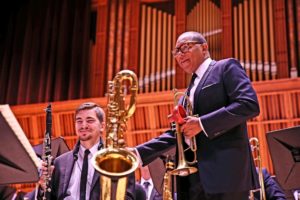