Eric Wyman is a Ball State alumni with a bachelor’s degree in English Language and Literature. He has worked several odd jobs since graduating from the English department and has now landed at The Writing Prompt Exchange where he works as a fiction editor. See what he learned after graduation as he worked his way from AmeriCorps NCCC to becoming a full time fiction editor below. 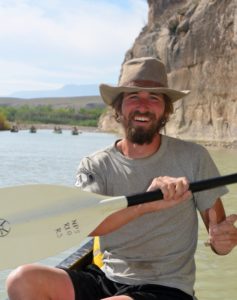 Eric Wyman on the Rio Grande River in Texas

I start work around 8 am, knock out some small projects, usually about 10k words before noon, then eat lunch. After that, I get another 7-10k words done before 2 or 3pm then I go outside and play in the New Mexico sun!

What classes have helped you the most in your career?

The classes that have helped me most throughout my career were, without a doubt, my fiction writing and literature classes. Not only did I learn what makes for good storytelling, but I learned how to think critically and how to make a persuasive argument (two things you happen to use a lot when you’re older… who knew?).

What classes do you wish you had taken?

I wish I had taken an advanced linguistics course. I love learning about the small nuances of the language we speak today and how develops and evolves. In today’s digital age powered by social media and the internet, I feel like there is a lot of interesting things one can learn in regard to how people use language (and emojis) nowadays.

What did the time after you graduated to when you got your job as a fiction editor look like? Was it right away, or did it take time to get the job? Did you have jobs in between? 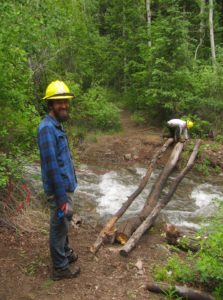 Eric Wyman building a bridge over the Conejos River in Colorado

So I definitely did NOT become a fiction editor right after graduation.

Before I became an editor, I worked the graveyard shift in a bleach factory, I joined Americorps NCCC and built houses and trails for the National Park Service, I traveled to 43 states (I only have 7 more to go before knocking ’em all out!), worked the night shift at a Starbucks in Seattle, and then I moved to Denver to start a house painting business.

In between all of these jobs I would take on a few side gigs here and there to tutor people with writing and do some volunteer work for a few online publications, but it wasn’t until a few years ago when I moved to Santa Fe that I started making a proper career out of editing (the day when I could pay my rent with money I earned editing was a great day indeed!).

What advice would you give to students looking to get a career in this field? Or for English majors trying to figure out what comes next after graduation?

Read everything you can, then read some more. And more importantly, read outside of your comfort zone; if you read a lot of fiction, pick up some non-fiction. If you only read non-fiction, pick up a Stephen King book and read that. Expose yourself to different perspectives, even those opposite of your own. It’ll all be valuable ammunition for you when you take up the red pen.

As for what to do next after graduation? Join Americorps. Seriously. Kiss your folks goodbye and travel abroad. Join the Peace Corps, teach English in the Republic of Georgia, spend two weeks in a national park, bum around the American Southwest for a few months in a crappy Subaru that was made when the Berlin Wall was still standing.

There is no better time than after college to start gathering experiences and making memories, all of which you can use to fuel your creativity. There will always be some job out there somewhere waiting for you, so don’t feel pressured to rush into that hot internship in Chicago the second after you throw your graduation cap in the air.

One of the best things that ever happened to me was NOT getting an editorial job right after college.

What are some of the most valuable skills you learned in the English department?

How to argue is, hands down, the most valuable skill I learned in the English Department at Ball State. Doing your research, gathering the facts, refining your opinion, and then presenting that to another person is a tremendously important skill that I feel is sometimes grossly underrated.