Mysteries are a pillar of storytelling. Be it a dime novel about the murder of a wealthy count or a saga of books following a pipe-touting, plaid hat-wearing detective, everyone loves a case that challenges their brain, sneaking clues into otherwise standard sentences to keep you guessing. However, the charm of a written mystery is often lost when adapting it into a visual medium. Focusing on an item with a camera is much more liable to give the mystery away than a passing mention in the written description of a room. Thus, good mystery adaptations are few and far between, especially when it comes to television—making it all the more important to highlight those that succeed. I’d like to recommend two shows at opposite ends of a spectrum. One is morbid, one is comical. One a slow burn, one a quick romp. One focuses on a small town, one takes the global stage. I’m talking about Sharp Objects and Killing Eve. 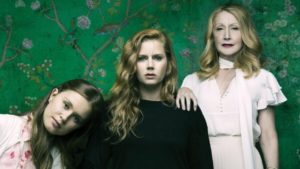 Sharp Objects is an HBO adaptation of Gillian Flynn’s novel of the same name. Crime reporter Camille Preaker (Amy Adams) must return to her hometown of Wind Gap, Missouri to investigate the murder of two young girls. Adding to this horror, Camille must also endure the ire of her ever-resentful socialite mother, Adora (Patricia Clarkson). Dealing with trauma new and old, Camille must uncover the truth of the mystery that is tearing her hometown apart. Before I go any further, I would like to note that Sharp Objects is not for the faint of heart. It deals with complex, tragic topics like sexual assault, self-harm, and suicide. Much like the novel, however, the show does not romanticize any of this subject matter and portrays them with as much respect and tact as Flynn’s tragic story allows.

You might have heard whispers about HBO’s other book adaptation, Game of Thrones. While that HBO adaptation is one of grandeur, Sharp Objects is eerily intimate. Director Jean-Marc Vallée worked closely with Gillian Flynn to accurately portray the events that shook Wind Gap to its core. Much like the novel, the show is a slow burn that builds an overwhelming sense of dread. Amateur detectives will love this show due to the insane level of detail in each shot. Every frame could hold a clue, leaving the viewer guessing until the very end of the show (like, after the credits end of the show). Sharp Objects is certainly heavy, but if you’re looking for a haunting murder mystery, look no further. 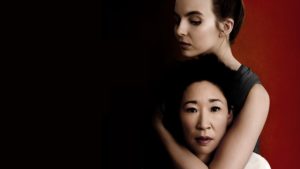 On the other side of the spectrum, we have Killing Eve. This BBC America original series focuses on the lives of two women: Eve Polastri and Villanelle. Eve is an intelligent, ambitious international detective and Villanelle is an assassin working for a mysterious organization. Cat and mouse plots have been done before, but none have done it like this show. Unlike your average Sherlock/Moriarty dynamic, Eve and Villanelle make no effort to hide just how obsessed they are with one another. However, this isn’t a dark and gritty obsession. If anything, it’s… kind of fun? Killing Eve certainly takes a dark comedic approach to storytelling.

Killing Eve took some work to adapt. The source material, Codename Villanelle, is actually a compilation of novellas written by Luke Jennings. The first novella, Codename Villanelle, focuses on, well, Villanelle. It’s a succinct summary of how she came to become a stylish, professional assassin. However, much of the show’s first season revolves around figuring out who exactly this international killer with a penchant for flair is. When that’s solved, the focus shifts to the mysterious organization pulling the strings. Eve is the primary focus of the show, but some storylines are told from Villanelle’s perspective. Aside from this shift in perspective, the novel’s details and story beats are all present, creating a faithful adaptation that shows that changes are sometimes necessary to create a strong, independent body of work.

These two mysteries, different as they may be, should leave you #bsuenglish sleuths guessing for days to come. You can find Sharp Objects on HBO Go/Now and Killing Eve is currently on Hulu.