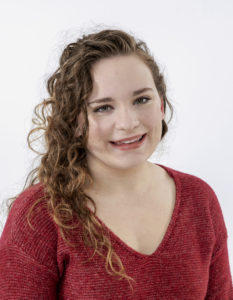 I started college as a biology major. Halfway through my first semester, I switched to biochemistry—mostly because I really didn’t want to take botany or ecology.

I applied for a scholarship to study abroad the summer after my freshman year. I didn’t get it, but my advisor for the personal essay application asked me if I was a creative writing major. I wasn’t. She told me she could see me writing a memoir someday; that offhand comment meant a lot of me.

I’m not good at saying “no” to people or opportunities, and writing makes that easier. With writing in mind, I can justify turning down something I don’t have time for, and instead make time for what is important.

On a whim, I signed up for ENG 285, taught by Brian Morrison. I didn’t change my major and I didn’t tell anyone I was taking the class. When my honors advisor emailed me asking if I wanted to declare a creative writing minor, I told her I was just trying something out.

I loved it. Everything in my life (including my science courses) felt more vibrant and worthwhile when I gave myself space to write. It just felt right to me.

So I started researching: I found out that humanities majors have higher acceptance rates to medical school than biology or chemistry majors do. I also discovered that a good portion of medical schools have incoming classes with around 20% of students who didn’t major in science.

I still didn’t want to declare the English major yet. I had started doing research with one of my chemistry professors in the spring of my freshman year, and I was worried that officially changing my major, even if I already knew it was what I wanted, would affect that research position. In the end, it didn’t.

Halfway through my sophomore year, I changed my major to English with a concentration in creative writing and never looked back. One day in first week of Organic Chemistry II, I arrived early and was the only one there. My professor looked at me.

I had decided by then I wasn’t going to justify it too much.

He nodded, and that was it.

I didn’t tell anyone in my research lab for months. I kept working as usual.

However, my principal investigator found out when he tried to nominate me for awards reserved exclusively for chemistry majors. He sent me an email asking if I was a chemistry major. I said no, I was premed and English. He didn’t respond. When I saw him next, he asked if I needed a letter of recommendation for an internship in South Africa I was applying for.

I realized then that my major really didn’t matter as long as I showed up, was present, and did the work.

Of all the awkward conversations and explanations I’ve had over this whole premed-while-majoring-in-English hullabaloo, the ones involving some students in my research lab stick out the most.

I was teaching some other undergrads as a part of the research protocol I had been working on for a year or so, and I had on the lab table a copy of Gertrude Stein’s Tender Buttons from my literature class. The one grad student there asked me what class the reading was for, and I told her it was for my 300-level lit class—a class I was taking because I was an English major. She looked confused. She said, “That was cool”, and the conversation ended there.

A couple weeks later, I was in the lab, and a different grad student brought my major up again. He asked, “Are you really an English major? You’re so much better than that.”

I don’t even remember what I said in response. All I remember is the sensation of all the blood in my head rushing toward the back of my eyeballs. Not necessarily in anger, but in panic.

It isn’t easy to justify this sort of thing on the spot without pulling out several pages of admissions statistics, writing out a few concept maps explaining how English connects to medicine, and attempting to articulate the intangible feeling you get when what you feel aligns with what you do.

It doesn’t matter what I said to him in response. It doesn’t even matter what he thought about the relative value of different college majors. I don’t look down on him for thinking majoring in English has less value than majoring in, say, biochemistry. English majors are used to having to prove themselves to others.

Recently, when I decided to leave the lab to pursue other things, the same grad student who had said I was too good to be an English major complimented me. He said, “You were the gold standard of undergrads in our lab.”

And, really, I guess I was.

Throughout this experience, my English professors have been the most supportive. They’ve never doubted me for a minute. Most others, even if they haven’t said much, have thought I was nuts. And that’s okay.

Yes, You Really Can Do Anything With an English Major

If you want to do something that seems absolutely wild, you can. Honestly, someone has probably done it before–there are so many people in this world doing incredibly weird and wonderful things. It doesn’t matter if your parents, your professors, your friends, or even you aren’t sure that it makes sense. Don’t let what sounds normal stop you from doing what you want.

If it feels right, sometimes that’s all that matters. Meet the minimum requirements, but more importantly: show up, be present, and do the work well—the rest doesn’t matter.