If Ball State is celebrating its 100th birthday, then so is the English department. We’ve been here from the beginning.

The story of #bsuenglish is a microcosm of the story of the humanities in higher education. To tell that story, I spent a day digging around the Digital Media Repository at the Ball State Library.

To start, let’s remind ourselves what Ball State University looks like today–structurally–and where the English department resides in that structure.

Eight colleges with multiple departments in each college

And let’s look at the structure of the English department itself: five disciplines or “areas”

Once upon a time, Ball State was just these 11 departments:

We were, after all, a “normal school,” dedicated to producing public school teachers. And five of the 11 departments (in blue) were part of what would become the present-day College of Sciences and Humanities.

These days, students flock to highly specific majors whose names imply exactly what you can “do” with it. The majors in which “professional identity” is baked into the curriculum.

But once upon a time, “going to college” meant (mostly) studying the sciences and humanities.

Once upon a time, Ball State was the College of Sciences and Humanities.

The department of “Commerce” had become “Business Education.” And there were two new departments: education and library science.

In essence, Ball State’s organizational structure mirrored the structure of a typical high school at that time. An academic department for every school subject. 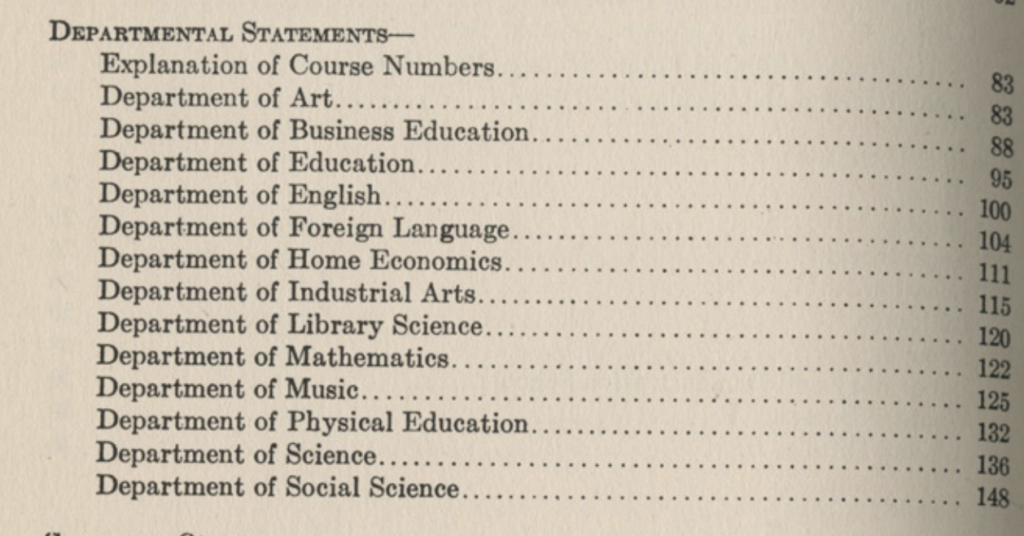 And in the English department, the focus was exclusively teacher preparation, which is what determined our course offerings.

What might a middle school or high school English teacher be expected to teach? The English department had a class for that.

If you wonder why everyone thinks that majoring in English only prepares you to be a teacher, this is why: because once upon a time, that’s what it meant—at least here at Ball State.

By 1953, the English department at Ball State contained multitudes. Don’t believe us? See for yourself.

We taught many subjects that would eventually spin off into their own departments and colleges, courses in journalism, theatre, etc., but also courses in public speaking (which would become COM 210), radio and television (which would become TCOM), and speech pathology and audiology (including a course in Anatomy and Physiology of the Ear and Vocal Mechanisms!).

By 1968, the year I was born, three years after Ball State went from a “teachers’ college” to a university, this is what CSH looked like. 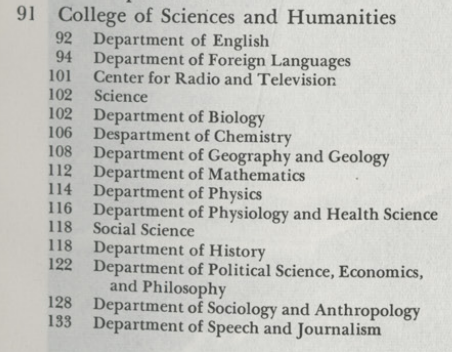 By this point, speech, journalism, radio, and television have all left the English department, but did you know:

By 1970, you had three ways to concentrate in English:

Also: all the upper-level lit courses were about male writers (except Woolf, of course). See photo on the right.

Soon, the canon wars would begin. If you’re a current student reading this, you’re too young to remember the canon wars, but I remember them well. I entered college the year that Allan Bloom published The Closing of the American Mind.

This New York Times article summarizes the canon wars quite well, but the gist of it was this:

The lines aren’t drawn between right and left in the traditional political sense, but between A.) those who defend the idea of a distinct body of knowledge and texts that students should master and B.) those who focus more on modes of inquiry and interpretation.

Suffice it to say that once upon a time, especially at a “normal school” like Ball State, English departments saw their mission as A, but pretty much B “won.” 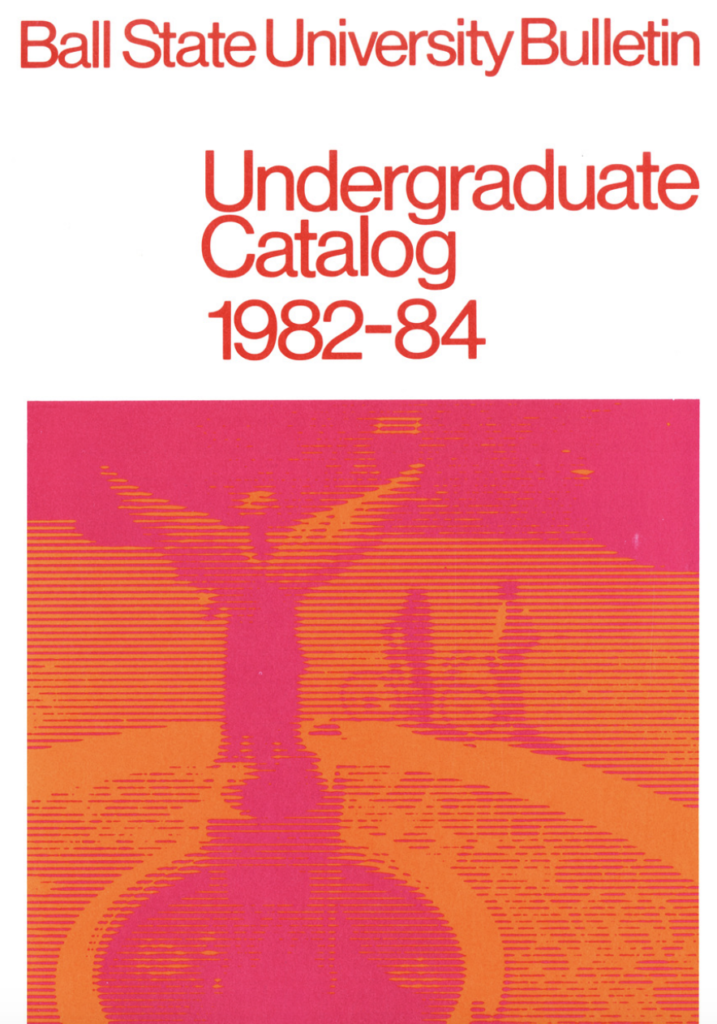 By 1982, there were 26 departments (!!) in the College of Sciences and Humanities and two institutes.

Why was it so big? Because CCIM and CFA didn’t exist yet, and so CSH included social work, TCOM, journalism, speech, theatre, plus some of the departments we still have today, such as Criminal Justice and Criminology (although back then, the last C was “Corrections”).

In 1998, ENG 231 Professional Writing was called “Writing in the Workplace.”

Also, instead of a multi-genre ENG 285 Intro to CW class, you had to pick prose or poetry.

By 1998, we’d replaced the “great authors” classes with the senior seminar we still have today.

In 2004, former provost Warren Vanderhill interviewed Tom Koontz, a former English department chair who helped to create the creative writing program we have today. Koontz hired Jill Christman, fresh from graduate school. In that interview, Koontz talks at length about “the old days” and the new department that was emerging. You can read the transcript.

I think it’s important for students to know that colleges weren’t always organized the way they are now, with the liberal arts real estate giving way to easy-to-spot pre-professional majors and colleges.

As I did this research, I wondered: When all the “vocational” disciplines that used to be under the umbrella of English were spinning off to form their own departments, then colleges, did the English faculty think, “Hmmm, maybe we should keep that one?”

I’ve taught at four different universities, and Ball State is the only one where journalism isn’t part of the English department. Here, it’s in an entirely college/school/division.

Another thing I’m struck by, after looking at the history of my own department’s curriculum, is how much it has evolved. I can’t help but remember my early years in the academy, the canon wars, the knock-down-drag-out fights about the necessity of “coverage.”

We used to wonder what would happen if we stopped requiring English majors to study the canon. Well, I guess now we know. Sure, sometimes, I’m shocked by what my students haven’t read and wish they’d read something (anything) in common. But mostly I think they’re brilliant.

For a long time, English was considered an essential subject, a practical major, one of the most popular in higher education. You could teach with it, sure, but you could do lots of other things with it, too. I remember that time. When I entered college in 1987, very few people ever asked me what I was going to do with my English major.

And then things changed.

I think a lot about this change, because it’s quite possible that by the time Ball State celebrates its 200th anniversary, you won’t be able to major in English or history or a foreign language here anymore. and that fills me with panic. God, I hope that’s not true, but it’s possible. It’s already starting to happen. You can read about these declines in The New Yorker, The Chronicle of Higher Education, and Inside Higher Education.

But do you want to hear something interesting? The Ball State English department isn’t declining. In many ways, it’s growing.

Why is that? Why here? Why us?

Ah, those are good questions for another day.

If you have a story about the history of the Ball State English department, tell us in the comments! We’d love to hear from you.