Let’s be real, #bsuenglish. Whether or not you’re used to the cold or you shiver at the slightest breeze, winter gradually destroys your soul without much warning. However, the biting winds and salted sidewalks shouldn’t prevent you from bundling up inside and treating yourself. I recommend a good laugh — and probably some fuzzy blankets. In order to keep you laughing to start the Spring semester, here’s a little list of stand-up comedy specials to watch (all available on Netflix). 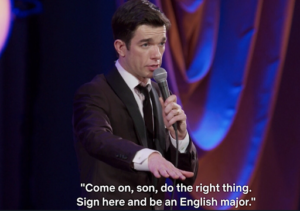 It’s no secret that John Mulaney is popping right now in the world of stand-up comedy. That being said, you’ve probably already seen this one. If you haven’t, boy, are you missing out. While arguably every John Mulaney special is a winner, this one contains some good bits about being a college student, specifically an English major. Those bits, and pretty much every other bit, are extremely relatable — everyone loves to laugh at something relatable.

Demetri Martin is the King of Wit. His jokes couldn’t be more cleverly written. For an English major, watching his comedy is a grand ole time because it is largely based on wordplay and finding faults in common phrases in the English language. Demetri Martin is a true overthinker, so I can promise one, if not all, of his observations of daily life will make you pause to think, “Wow, I didn’t realize that.” As a deadpan comic, Demetri Martin embraces awkward and sits in it — something any English major can appreciate. 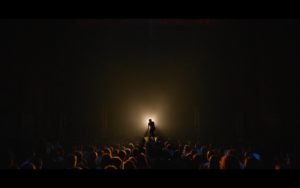 If you don’t know comedy, but you know Bo Burnham, it’s probably because he is the writer and director of the film Eighth Grade. While Eighth Grade is an excellent movie, it’s not exactly comedic. It’s humorous because it’s relatable, but it’s nothing compared to Bo Burnham’s stand-up. His act melds music and comedy together, making his comedic genius that much more impressive. I recommend Bo Burnham for English majors because every joke is meticulously written and planned. This kind of attention to detail and wording can be appreciated by anyone who has done creative writing. Finding the right words is hard. Finding the right words to make people laugh is harder.

This special is wildly underappreciated and underknown. So, as the kids say, we are sleeping on Ryan Hamilton. For fans of John Mulaney, I highly recommend Happy Face. Hamilton’s style of comedy is storytelling. English majors love stories! That’s what we do! Being from a small town in Idaho, Ryan Hamilton offers an interesting perspective on life in general. Plus, there is a long bit on hot air balloons that you didn’t know you needed to hear until you do. 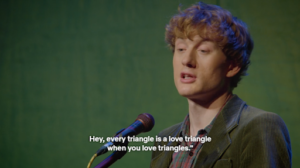 Being a British comedian, James Acaster is also a bit underknown. Don’t let this discourage you; he is hilarious. My favorite part of his humor is that it’s very pure; there’s no real mention of political or social issues. Instead, Acaster creates his own world with his comedy. This makes his comedy memorable for English majors because all of his concepts are original and imaginative. Being in this world is a nice escape from the stress of the real world. Plus, this special is actually split up into four parts, so it’s a four-for-one deal if you’re really looking to binge and procrastinate.

I personally have never seen this special, but a fellow classmate was really passionate about it, so I enlisted him to tell me why we should be watching it. His words were, “Nanette is a truly game-changing comedy special.  It’s the kind of set that will make you reconsider everything that you thought about comedy. Nanette is about living as a queer person, but on another level, it is a deep exploration of the point of comedy and it’s relationship to pain.” A big part of being an English major is examining life as we know it. According to this description, it seems Hannah Gatsby does just that.

Tig Notaro, Happy to Be Here 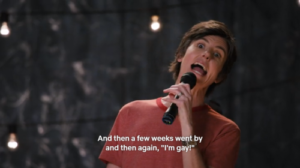 I do have to say my favorite Tig Notaro bits can be found on her albums (available through Spotify), but if you’re just into watching stand-up, this is her most accessible special. Tig Notaro has had one heck of a life. Between being openly gay and surviving a double mastectomy, she brings a completely unique and unmatched perspective to her work. Tig Notaro’s comedy style is deadpan and relies heavily on storytelling. I’d say her appeal to English majors comes from her ability to re-create memorable stories that you can’t help but want to hear again and again.

There you have it. Seven specials to help keep things warm despite the cold. Happy laughter and happy winter, #bsuenglish!