The 2020 general election on Nov. 3 is on track to becoming nothing short of a landmark event in American history. Historic levels of turnout, feverish political polarization sparked by an unorthodox presidency, and an unprecedented global pandemic are all contributing to levels of fear and uncertainty perhaps not reached in the United States since the 9/11 terrorist attacks more than two decades ago. Between the high stakes of partisan politics and the novel coronavirus flooding the polls with early voters and mail-in ballots, can Americans be certain that their votes will be counted?

Professor of Computer Science Dr. Jay Bagga and Professor of Criminal Justice and Criminology Dr. Bryan Byers are two vanguards of election security in the state of Indiana. As co-directors of the Voting System Technical Oversight Program (VSTOP) housed within the Bowen Center for Public Affairs, Bagga and Byers directly support the Indiana Secretary of State with the testing and certification of thousands of voting machines and electronic poll books used throughout all 92 of the state’s counties. 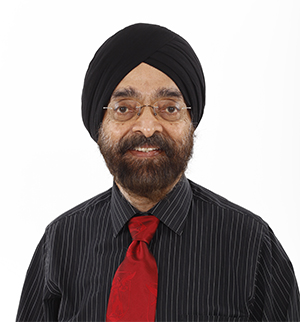 Dr. Jay Bagga is a professor of computer science at Ball State University.

So, should Hoosiers feel confident that Indiana is conducting a free and fair election despite everything that has happened in 2020?

“From the VSTOP perspective—from the certification perspective, security and training of poll workers—things have gone on as usual,” Bagga said. “From that point of view, VSTOP believes that the elections are secure and that the machines are election ready.”

But to understand how elections are made secure and why such precautions are necessary, Bagga and Byers say you have to go back nearly 20 years to the state of Florida.

Hanging Chads in the Sunshine State

In 2000, Republican George W. Bush defeated Democratic challenger Al Gore in the presidential election by just five electoral votes. The results of the election hinged on the state of Florida, where results were so nail-bitingly close that a recount was triggered by state law. After a month-long dispute between Republicans and Democrats, the United States Supreme Court voted to end the recount in a divisive 5-4 decision, securing Bush Florida’s 25 electoral votes and pushing him over the threshold needed to win the election.

Central to the dispute of the recount was the use of mechanical voting machines, which processed ballots in the form of paper punch cards to record citizens’ votes. An incorrectly punched ballot, like the infamous “hanging chad,” would result in the vote not being counted by the machine. 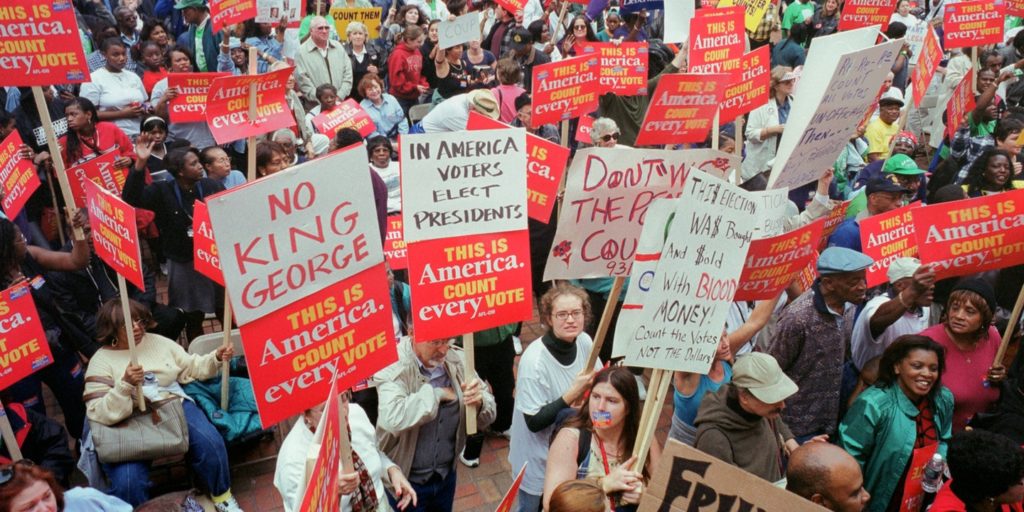 Protestors gather in Florida to protest the Supreme Court’s decision to end the recount in 2000. Source: The Intercept.

“The votes weren’t declared on election night or even a few days after that. Eventually it was found that certain mechanical voting machines in Florida were part of that issue.” – Dr. Jay Bagga 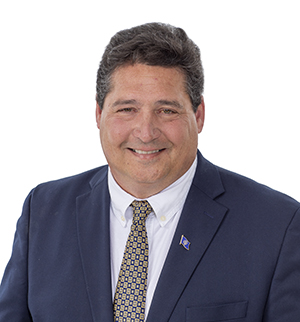 Dr. Bryan Byers is a professor of criminal justice and criminology at Ball State University.

After the 2000 election quite literally punched a hole in American democracy, states began to rapidly transition away from the mechanical machines and began employing new types that did not rely on punch cards. VSTOP was created—and later even codified into Indiana law—as an additional measure to maintain confidence in Hoosier elections. Bagga has been part of VSTOP since the beginning, while Byers joined in 2017.

VSTOP is charged with many responsibilities, two of which involve election equipment: First, they ensure that all voting machines in Indiana have been properly tested and will function as intended. Secondly, they conduct “risk-limiting audits” (RLAs) after elections to ensure that candidates who received the most votes are in fact the true winners.

Hoosiers voting in person this year in Indiana will be using one of two general types of machines: The first, called an optical scan voting machine, still uses paper ballots. But unlike the mechanical machines of the past, this one uses electronic sensors to scan the bubbles that voters fill in by hand. The second type of machine is called a direct record electronic (DRE) voting machine, and voters navigate a digital display using buttons or a touch screen. Some of these DREs print out a paper receipt so voters can see that their votes were recorded.

But before each voting system model can be used in a real election, it must undergo testing at both the federal and state levels before it can be certified for use. The overall process spans months and generally follows these steps:

Step 1: The vendor brings a sample of the machines they produce to a federal lab called a Voting System Testing Lab, which is certified by the U.S. Election Assistance Commission (EAC).

Step 2: Each voting machine is subjected to rigorous testing to process thousands of ballots. The tolerance for any errors is very, very low—something around a fraction of a percent, said Bagga.

Step 3: The vendor does not legally have to be certified by the EAC to apply for certification in Indiana, but they must follow the EAC’s voluntary voting system guidelines. After meeting these guidelines, the vendor can apply to have its machines certified in Indiana.

Step 4: Once an application is received, Bagga and Byers, along with the rest of the VSTOP team, will analyze the data from the federal testing lab to ensure the tests were conducted properly and are in compliance with Indiana law.

Step 5: Next, VSTOP typically invites the vendors to bring their machines to the Ball State campus to perform more testing, such as examining the hardware and software components of the machines. Experts are also brought in to ensure the machines meet accessibility mandates for people with disabilities. After these additional testing measures, VSTOP conducts a mock election using the machines.

Step 6: Finally, VSTOP writes a report documenting the process and concludes with a recommendation on whether or not a vendor’s voting sytem should be granted certification. These recommendations are presented to the Indiana Election Commission for final consideration.

Step 7: Once certified in Indiana, these election machines can be used for up to four years. The certification expires for all machines, regardless of their certification date, on Oct. 1 of the year following a presidential election (in this case, Oct. 1, 2021).

Potential issues like filled-in bubbles failing to register in an optical reader or a touch screen being poorly calibrated are all accounted for during the testing phases.

“All those scenarios are covered and extensive tests are run by the voting system labs. With improvements in technology, those scanning machines have become very smart.” – Dr. Jay Bagga

It is important to note that the state is phasing out electronic DRE machines that do not produce paper receipts for two reasons: First, said Bagga and Byers, is because numerous election experts have found that a simple piece of paper is the best way for a voter to verify that their vote counted, and secondly because the paper trail is critical to performing post-election audits.

As an additional measure of election integrity, the state of Indiana has entrusted VSTOP to employ the use of post-election, risk-limiting audits. Developed by a professor of statistics at the University of California, Berkeley, these audits are carried out by collecting a random sample of the counted ballots and performing statistical analyses to produce an accompanying statistical result called a “confidence level” (typically 90% or 95%). The size of the sample must be increased in races in which the results are very close, and in extremely close races, a total recount of all the ballots could still be requested or even mandated by law.

“With that high level of confidence, you can say that the winner was indeed the winner,” said Bagga.

VSTOP is currently producing training materials with the hope that counties will one day be able to conduct these audits themselves.

“It’s a very exciting time for Indiana to be one of a few states that is actively pursuing this method in order to verify election results and help promote confidence in elections.” – Dr. Bryan Byers

From the point of view of VSTOP, the 2020 election is no different than any other election. Mail-in ballots are still scanned by the certified voting machines as usual, and even historic levels of turnout won’t overwhelm the machines from a technical perspective.

“The fact that there’s a larger volume is beside the point. That should not affect the security and the correctness of the ballots,” said Bagga. “The counties have their machines all in place, all are certified and they have followed the proper training procedures, and they have prepared for the elections with the vendors. From that perspective, it’s like other elections.”

The VSTOP team is currently in the process of adding two new staff members to its ranks as they continue to work with the state of Indiana to provide innovative solutions to the modern challenges of election security. The piloting of the risk-limiting audits is just one way VSTOP is strengthening its collaboration with the state, which is likely to grow even further since the Department of Homeland Security designated election infrastructure as critical in 2017.

“That changed everything,” said Byers. “That has led to a lot of additional activities that we are very excited to be involved in.”

Related: Social Media is the Wild Wild West: We Need to be Savvy Consumers

The Voting System Technical Oversight Program (VSTOP) is part of the Ball State University Bowen Center for Public Affairs at Ball State. Focusing on civic literacy, community involvement and public service, the Bowen Center provides networking, training, and research opportunities through its three institutes: The Bowen Institute on Political Participation, the Institute for Public Service, and the Institute for Policy Research.