Dr. Pedro Bassoe, an alumnus of the Department of Modern Languages and Classics, recently accepted a position of Assistant Professor in Japanese at Purdue University, where he will be teaching Japanese literature, visual culture, and film, among other courses.  He took some time from settling into his new position to reflect about learning Japanese and his time here at Ball State. 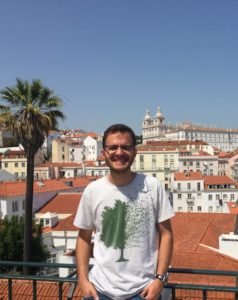 “…I always felt like I would love to know another language and to be able to explore something else.”

Dr. Bassoe found an interest in learning more about Japanese culture at an early age through media.  Exposure to anime like Dragon Ball Z, Sailor Moon, and Pokémon began to truly spark his interest.  Having a background rooted in another foreign language, Portuguese, also helped foster his engagement with different cultures.  During his childhood, he would go to Brazil and would watch anime in Portuguese translation, such as Yuyu hakusho and Saint Seiya, and thereby became aware that Japanese imagery had seemingly permeated media around the globe.  From that moment on, his interest in Japanese grew.

Growing up in central Florida, there were not many options to take an Asian language in high school.  When looking at college programs, Ball State stood out because of the more developed Japanese program offered by the Department of Modern Languages and Classics.  Although he initially planned to major in anthropology and minor in Japanese, within a few weeks of beginning language study, he decided to take on Japanese as a second major.

“I feel like that sense of a tight-knit community and the accessibility of Japanese was unique at Ball State.”

Ball State offers a unique experience when it comes to studying Japanese.  It is easy to take advantage of opportunities to practice Japanese and to become involved in different activities that bring foreign exchange and American students together, unlike other universities with large clubs and programs that are harder to become a part of.  The accessibility of the language and the ability to get a personal connection with other people who speak the language is vital when trying to learn a new language.

Dr. Bassoe studied abroad at our sister school, Sapporo University, and found that there were few opportunities to speak English.  He had this to say about his experience:

“I studied Japanese for two years and then got to Japan and realized I couldn’t have a conversation with anybody quite just yet…I studied hard… I did everything that I could, but I got there and I realized there’s so much vocabulary, so much slang, so many idioms, so many ways of speaking, that you really only encounter, I think, in  real-life practice.  So that’s something that I still feel… there are always words and expressions that come up that are different than when you’re reading a textbook.  Reading a book there are just all these different levels and expressions of language so I feel like… the real accelerated course in Japanese came from studying abroad.” 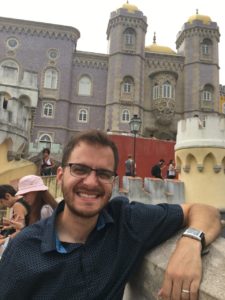 Dr. Bassoe recommends studying abroad to really immerse yourself in your language studies.

The experience of studying abroad is essential to anyone studying a foreign language.  Textbooks can help you learn the basics of a language, but the real-life experience of immersing yourself into the language and culture is the best way to begin to truly communicate and understand.

Japanese as a Career

“The thing I really liked about Japanese was that it gave me a very particular skill.”

Japanese is a marketable skill in both the academic and professional job markets.  The ability to take a proficiency test and say definitively that you can communicate at a certain level can set you apart from the crowd.  Japanese, in particular, is a language that may not have as much competition as other popular languages, like French or Spanish.

After graduating from Ball State, Dr. Bassoe went on to get his Master’s Degree from the University of Oregon and then his Ph.D. from University of California, Berkeley.  He accredits his success to encouragement he received from his professors along the way who inspired him to continue his education.  Before accepting his new position at Purdue University, Dr. Bassoe was a Visiting Assistant Professor at Willamette University in Salem, Oregon.  He is looking forward to both the institutional support and the opportunity to write and publish, as well as the ability to interact with many different people from different backgrounds and walks of life.

Double majoring can be nice, especially if your other major is vastly different.  Studying a foreign language takes a different kind of mental energy than other disciplines and can be a fun way to balance things out.  Language classes can be a lot, but they feel like a break from writing essays and other kinds of classwork.

Take advantage of groups like the Japan Club, which provide the opportunity to practice language with foreign exchange students and to learn new aspects of the culture. Try to integrate the language into your personal and social life as much as possible in these environments where you have access to people who can speak the languages you are trying to learn.

Continue to study and learn.

It can be difficult to continue to study and learn as you go down different educational and career paths, but learning a foreign language can open doors to opportunities you might not have thought about.  Learning a foreign language can help you to communicate more clearly, think creatively, and imagine new approaches to problems from a different angle.

Read more of our alumni spotlight stories by clicking here!