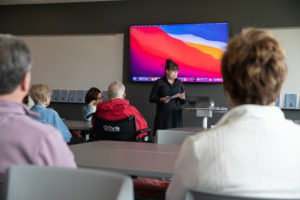 Here at Ball State University, there was a fascinating and unique immersive learning class called, “Sitting at the Feet of our Muncie Elders: Stories of Resistance and Resilience.” It was a class where students got to visit actual elders in the Muncie community, specifically at nursing homes in the area. Students listened to the fascinating stories these elders had to share, then transformed them into stories that was published in a book. Recently we interviewed Dr. Jones, who held the class, to ask questions and get insight into the class.

This interview was conducted by Lauren Knauer.

What made you want to start this project?

Dr. Jones described how over the years, she has had several immersive learning classes, and that she and her students produced books through said classes. (These books covered topics such as Black Lives Matter, culture, etc.) In one of those books, she had senior citizens talk about their life in Muncie, and she loved their stories and their spirit. She said, “I was so inspired particularly by their stories that I thought that so much of what we do at Ball States is focused on kids.” She said she realized that “seniors are this overlooked wealth of knowledge.” With that new insight and perspective, Dr. Jones was inspired to create her class, having it focus on elders and their stories. (Their stories would eventually be published in a book.) She also mentioned how when she had planned the class for Fall of 2019-Spring 2020, she did not realize that the pandemic was coming. Her theme for the class was, “grit and resiliency.” When the pandemic came in the spring, and when we were all forced to have more grit through those rough times, she thought that the way everything worked out was very serendipitous, even if it made managing the class so much harder.

How many stories from these elders do you have? 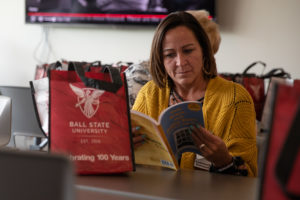 “Well, we collected probably 53 stories, and we published 51 stories. There’s always a couple people at the end who say they do not want their stories published.” Overall, she said there were about 60 stories total, but for stories told by seniors, there were 51 that had their stories published. There was always a lot of editing going on with these stories, especially when a person has dementia. “So, stories will come out in bursts, and then there will be tangents, so students often took their work and recomposed it into poetry.” With situations like that, it seems right, and a unique yet respectful way of telling someone’s story the best you can, even if they themselves are not completely sure of what their story was.”

What has been an exceptionally unique story that you’ve been told by these elders?

For this question, it was a touchier subject, and not one that will be written in much detail. She told several stories about racism in Muncie, and around Indiana in general. Racism is still a massive issue today,but taking a look into how it was enacted generations ago is very eye-opening. We have all learned the history of racism, but even hearing new perspectives is a way to learn so much more about it.

Is having students interact with Muncie’s elders a way to bridge gaps between generations?

“Oh yeah, for sure. My students loved it! They loved going out and talking, and in fact I had several that kept up relationships.” One of her students, Dylan, has kept in touch with one of the seniors, Bud, for over a year. Dylan thought of him like a grandpa. Several other students kept in touch with these elders, and still do today.

Do these interviews help shed a light on a time period in Muncie many people are not aware of? 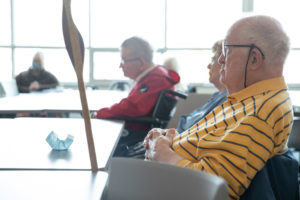 “You know, it didn’t really capture one time period, I mean the way we framed it was with different prompts. ‘Tell me a story about a time…’ It was not always particularly about a time period in Muncie. We had some veterans of war that talked about their experiences about World War II, with bombs and being on a ship.” The time periods and the experiences varied, but it shed a light on these people and life overall. Dr. Jones also goes on to say, that most of these elders did not always live in Muncie, so shedding a light on a time period in Muncie was not really the goal. They wanted and got stories from all different walks of life. People told stories of key moments in their lives about moments of resistance, resiliency, accomplishing the impossible, and more.

The YouTube video for this project mentions how students took elders’ stories and turned them into other things, such as poetry and flash fiction. To what degree are these stories fictionalized?

“None of them are fictionalized. They’re all nonfiction. It was just the reorganization of their words, but they had to approve everything. The seniors had to fact check and approve everything that we recomposed.” She mentions how with writing these stories, and making them creative nonfiction, how hard it was. Her students were not naturally amazing writers, so doing this project was a struggle for them. Dr. Jones reflects saying how people say writing fiction is hard, but she disagrees. Writing a nonfiction, and writing an endearing story about a real person’s life is very hard, but so worth it.

The information given to us mentioned that the pandemic forced certain plans for this project to be stalled. What were those plans and how would they have been enacted?

This was a very hard time for Dr. Jones and her class. They had just started the class in Fall of 2019, which was a semester away from the pandemic and all the upheaval it brought. She says, “It was a nightmare.”

The fall of 2019 is when they gathered the stories, but in the spring of 2020 is when she and her class would have gone back to meet the elders so they could fact check all that was written. With the pandemic, that was no longer possible, and most seniors did not use email, so they could not correspond over email. Dr. Jones had to personally find every senior’s address, and send them the writings, then wait to be mailed back their notes. What made it even harder, was that during this time, so many people’s addresses changed, because people were moving closer to family, so Dr. Jones had to figure that out as well. 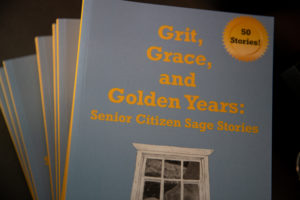 “It took from March to July, to get everyone’s addresses, to get everything printed, to snail mail it to them, with directions on what to do and how to send it back. So the book should have been published in May, but it did not get published until December, and the class was over! My students were gone, but I had four or five students, who even though they weren’t in the class, they stuck with me and got this done. It was very hard.”

She also mentions how she could have given up so many times, because she did in fact have the option to. But she remembered how her theme of the class was resilience and grit, so she powered through anyway, and got it all done. There is an event on Wednesday April 20th, for a reading and promoting this book. What makes things sadder though, is since the delayed publication, three of the seniors had died, so they are not here to hear their stories being told.

Overall, this process was a challenging experience, yet rewarding. It was the most unexpected thing, something that could have made this book not be published, yet it is. That is true grit, and a show of great character.

If you’re willing to share, were there any instances where elders did not want to share their stories with students?

“Yes, we had a married couple, they came together and were telling different stories. We were meeting in a library space and asked if they could tell the rest of this story in our room. This was at Westminster, assisted living and they were able to still live together.” She goes on to say that her student and a staff member of the assisted living home went with them, and they told the story of their son’s death-his suicide. They did not want to tell their story in a public space, but in the comfort of their own home. She says, “They wanted that written but they wanted it written so that you know that what happened, but you don’t say that it happened.” So, in a way they wanted it so the death was implied, but not explicitly said. In a way, they allowed their story to be told, but in a different, less direct way.

There were many stories that were told where the story teller cried, and the student cried. But there was also laughter and joy. Reflecting on your life when you are nearly at the end of it is a brave thing, and all of these seniors showed their amazing bravery and grit, through their fascinating lives and experiences, with all the stories they told.