This year’s In Print Festival of First Books (the sixteenth in the series) was hosted by Silas Hansen on March 29 and March 30. The first night of the event introduced three writers whose first books were published last year—nonfiction writer J.R. Jamison (author of Hillbilly Queer), poet Ananda Lima (author of Mother/land), and fiction writer Dionne Irving (author of Quint). The second night of the Festival consisted of a panel on publishing where the three authors were joined by editor and poet Abigail Cloud (Editor in Chief of Mid-American Review).

J.R. Jamison is a BSU alumnus who majored in Creative Writing. In his introduction, Jamison shared that he writes mainly to understand and process his own feelings. His published memoir, Hillbilly Queer, centers around his struggle of being a gay son in a conservative family and town. He shares the struggling family dynamics of trying to find a common ground, especially in his relationship with his father. Jamison felt that since he was ashamed of where he came from—his “hillbilly roots”—he needed to accept his roots in the same way that he accepted his gayness. To accept and make peace with every part of ourselves is to be free and at peace. Jamison says, “We are all deeper stories than what appears on the surface.”

Ananda Lima shared the common themes found within her poetry book, Mother/land—immigration and motherhood. Many of her poems are reflective, and sometimes sad. She reflects on who she is, compared to the world and other people, through her poetry. Lima writes about where she came from, her parents, and now being a mother herself as an immigrant living in America. She shares that she knows little about her ancestors, so she holds on to those she does know, and her memories. Her poetry connects her to her roots and holds space for those who may feel the same.

Dionne Irving is originally from Toronto, Canada. Her novel, Quint, is unique because of the switching points of view throughout. The novel is based on a real family of quintuplets who rose to fame in the 1940s, focusing on the struggles they faced—death, separation, and neglectful parents. The switching points of view offers raw and honest insight into the horrific experiences the family and siblings faced in an enlightening way.

The panel on publishing was filled with advice from the authors’ own experiences of their first published works. 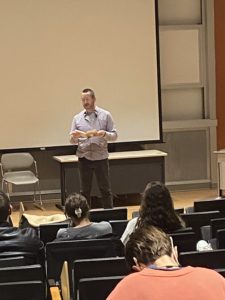 J.R. Jamison shared that he wrote his memoir accidentally—it was meant to be a series of short stories and essays, but he ended up with much more content than originally intended after a road trip with his Trump-loving father. Traditional novel publishing tends to require the entire book to be written before being sent out. Jamison pitched his memoir to 83 agents, of which 10 were interested in picking it up. He had a lovely partnership with his editor, being able to bounce ideas off each other to reach the final product. In terms of journal publishing, he advises making a dream list of the journals you wish to be published in—find writers you love with a similar voice to your own, and see where they’ve published smaller pieces as a starting point.

Jamison worked for 20 years in higher education and now focuses almost entirely on his writing and sustaining it. While book sales don’t offer all of the financial support necessary, he’s found a lot of opportunities in speaking about his work. He doesn’t write only books—he recommends diversifying your writing and trying new things. Strong words of advice from Jamison are to “break down those walls. Throw yourself out there and see what sticks.” 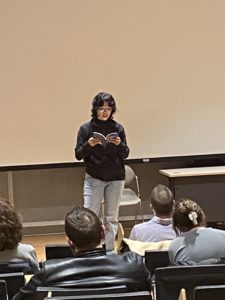 For Ananda Lima, poetry publishing is a bit different from novel publishing. She applied her work to numerous open submissions and contests until it was picked up. When applying to journals, she emphasizes the importance of learning not to take rejection personally—“different people are after different things.” Find journals you like and want to be published in; send it in and be patient.

Lima never had a plan to make writing her career. In addition to her writing, she teaches creative writing classes on top of being a mother to her son. When her son was younger, she found time to write in between homeschooling and doing other daily tasks. Now that he’s older, she writes at night while her son reads on his own. In her words, it’s all “tiring but energizing.” 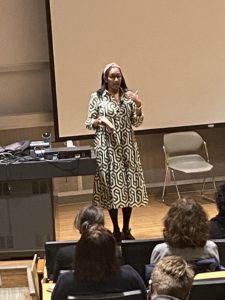 Dionne Irving sent her novel to a lot of agents, in addition to sending her work out to publications on her own until one picked it up. She shared that she actually prefers writing short stories and essays to writing novels. The publishing process isn’t as invigorating as the passion that comes from writing—journals are the access point to the business side of the whole process.

Irving started working in journalism, then moving to a corporate job, and is now in academics working as a professor. Finding time to write in everyday life looks different for everyone. Some people work a 9–5 job and write after, some teach and incorporate their writing that way. “There’s not one way to do this,” she says. Writing holds a freedom that not many other areas do.

Editor and poet Abigail Cloud offers some unique insight to the publishing process as she actively works on both sides of it. She says she is in the middle of the industry in every way possible. The intersection of being both an editor and a poet allowed her to be a “savvier submitter” by showing her what publishers and editors are looking for in submissions.

Cloud has always been a binge writer. She’s essentially lived on an academic calendar her whole life—her father was in academics when she was growing up, then attending university and grad school herself, to working in academics today. She does most of her writing in the summers when she tends to go to her family’s house up in Michigan where she can be alone to write in uninterrupted silence for long periods of time. She advises not to feel bad for not writing every day—”Don’t push the balance; encourage the percolation,” she says. 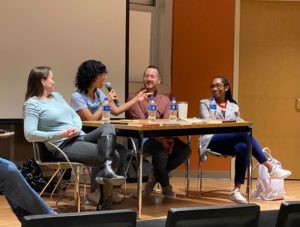 An audience member urged a question many student writers may have—if you haven’t been published, then can you really consider yourself a writer? The answer is YES! Every one of the panelists on Wednesday night agreed that you do not need to have anything published to be a writer.

Jamison and Irving both vocalized an internal struggle of calling themselves writers. There is a sense of imposter syndrome among many writers. Irving shared that even after 20 years, she still feels very insecure calling herself a writer sometimes.

If you’re feeling the same insecurities, take comfort in the words of this year’s In Print authors:

“You don’t have to be published—if you like writing, you like reading, then you’re a writer” – J.R. Jamison

“I’m fascinated by people; I think that’s why I’m a writer” – Dionne Irving

This year’s In Print Festival of First Books was a huge success, especially since returning in person for the first time since the beginning of the COVID-19 pandemic. Take these words of advice with you to encourage your passion in writing—maybe you’ll be up on the panel one day sharing your own advice with the next generation of Ball State writers.