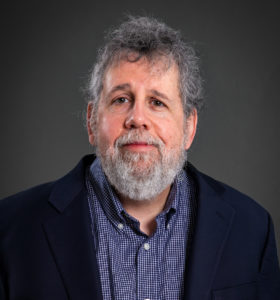 We cover a lot of ground here in the English Department. With major concentrations in creative writing, literature, teaching, linguistics, and professional writing, and graduate programs in most of these areas, we’re sort of like our own little college over here.

Social scientists (the linguists, and some of the rhetoricians) rub elbows with artists (the creative writers) and critics (the literature people). In our classrooms, aspiring poets and screenwriters converse, argue, and collaborate with future K-12 teachers and students aiming to travel the world with their license in TESOL (Teaching English to Speakers of Other Languages) tucked inside their passport.

For all this diversity, we have a lot in common. For one, there’s that word in our department’s name, “English.” All of us work with this supple and complex, global language, and we all study it in our own ways.

Perhaps most profoundly, though, writing ties us all together. Our faculty write, teach writing, teach people to teach writing, and study writing, whether that takes the form of the linguist’s analysis of the deep structures of language or the literature expert’s parsing out of a novel’s internal complexities and the threads that tie it to its culture and history.

As President Mearns shared in his February news update, English faculty and alumni have been on a publishing spree. At that point we knew of five alumni and five faculty with books coming out in 2021; I’ve learned of at least three more since then. 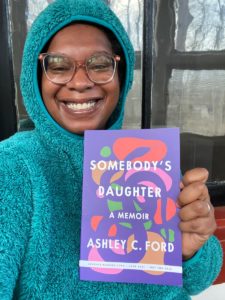 Of particular note are two books from major trade publishers that are generating impressive advance praise and publicity.

Ashley Ford’s Somebody’s Daughter, a memoir of growing up in a family beset by poverty and incarceration, is due out from Flatiron/Macmillan in June. The book is on Oprah’s booklist, and Time magazine listed it among its “21 Most Anticipated Books of 2021.” 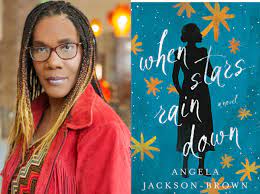 And Angela Jackson Brown’s novel When Stars Rain Down is just out from Thomas Nelson/Harper Collins. Set in Georgia in 1936, it tells the story of Opal, an 18-year-old woman struggling mightily to come of age under Jim Crow. It has appeared on numerous lists, including Buzzfeed’s “21 Upcoming Historical Fiction Books You’re Going to Love” and SheReads “10 Amazing Upcoming Books by Women of Color,” and it received a starred, advance review from Library Journal.

Ashley studied creative writing with us, and graduated with a degree in English Studies in 2018; she is also a prolific magazine writer, publishing in Elle, Buzzfeed, Teen Vogue, and New York Magazine, among others.

Professor Jackson Brown is an assistant teaching professor in our department. She joined us in 2008 and is a much-admired teacher, leading classes in first-year writing, creative writing, and African American studies. When Stars Rain Down is her second novel, and she has also written several plays that have been performed in Indianapolis and elsewhere.

Other alumni with books coming out in 2021 (as far as we know!) are: J. R. Jamison, Jay Coles, Sarah Hollowell, and Alysia Li Ying Sawchyn.

Writing takes many forms. And the media landscape in which we’re living is continuously generating new forms and new outlets. We’re living in a golden age of writing, if access to publishing, in one form or another, is any measure.

Creative teachers in the English Department are riding these waves, ushering students towards new media channels and forms as avenues to expression and engines of social change. Our class on “Digital Media Literacy” helps students think critically about and compose for new media; in our Compass Creative immersive class, students work on and strategize about the multitude of channels through which effective messages can be crafted and disseminated.

Most ambitiously, two recent courses had students composing for one of the most powerful contemporary media: the podcast.

In Andrea Wolfe’s Midwestern Stories Project class, students wrote and performed “Stories from the Heartland,” a podcast with that examines the mythology of the Midwest through interviews that seek to “challenge misconceptions and expand understanding of the midwestern past.” Ball State’s Digital Corps—a student-run media design agency—assisted with production.

And students in Jill Christman’s seminar at the Virginia B. Ball Center for Creative Inquiry created “Indelible,” a podcast about sexual assault on college campuses and the ways universities, students, and advocates are responding to this stubborn problem. “Indelible” was a finalist for Screencast’s national podcast award.

Our students will thrive most when we both stay close to, and honor, our roots and adapt creatively to the changing world. If you walk into Robert Bell in the Fall, you will chance upon some rooms where classes look much as they would have thirty years ago: students seated in a circle, frowning at their copies of a nineteenth-century novel (or, maybe, at an e-copy on their tablet) while one student offers an interpretation. Creative writers workshopping a poem while the author listens, enthusiasm and apprehension contending in her face.

But you’ll also find students strategizing about the best way to market their online journal, or arguing over fine points of their webpage design. These activities might seem less in tune with stereotypes of the major. But writing cuts through them at every stage—from the banal email to the print shop to the polished prose on the (e-)journal’s page.

Nothing runs deeper in our roots than writing. And nothing will put out students in better position for the life that awaits them than vigorous and varied practice in the many ways we write today.