Cody DeHaven graduated from Ball State’s English Department, where he majored in English Language and Literature. He now works for Western School Corporation as a high school English teacher. See how he used his English degree to go from teaching music to teaching junior high, to finally landing on teaching high school English. 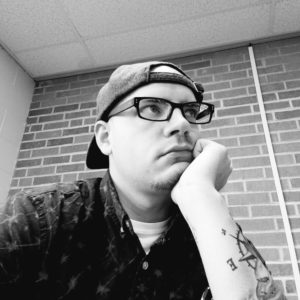 The first bell rings at 7:30am, but I’m usually at school by 6:45am to run copies and gather materials. I teach 11th grade English, which is dedicated to British literature at my school, and I also teach a section of honors English, which is still British literature, but it uses a different set of texts. My school uses 45 minute class periods with a five minute passing period, so things move pretty quickly.

I teach three classes in the morning before my prep period. This period is my time to grade, plan the next lesson, or, sometimes, just listen to music or read a book to center myself if the day is particularly hectic. I get a half-hour lunch before I teach my last three classes. The day ends at 2:30 when the kids leave, and I’ll normally stick around to make sure I have a solid plan for the next day before heading home.

I have a rotating schedule of meetings before or after school depending on the week, which includes a PLC (professional learning community) meeting with my department about 6 times per month, and a meeting for teachers new to the corporation about twice a month.

What did the path look like from graduation to your career?

I taught music part-time while I was in college, so I sort of knew I wanted to give teaching a shot. I also knew that I could teach with my degree for a period of time before I needed to decide if it was right for me.

So, I put together a resume and a cover letter and started applying to area schools. I applied to 10-15 places and got three interviews. I bombed two of them (they were my first ones…) and really hit the third one out of the park, and they hired me to teach 7th grade English.

I decided near the end of that year I wanted to move up to high school, so I applied to another slew of places, and landed just one interview at my own high school where I graduated. I got the job, and that’s where I work now.

What advice would you give students?

You’ve got to be passionate about the process.

This is probably an unpopular view, but I saw a lot of my peers want to be English teachers because they were touched by Harry Potter or John Green novels as a kid, and they, naturally, want their students to find their “place” in literature. Nothing against J.K. Rowling or John Green, or certainly these colleagues, but that isn’t enough.

I really believe you’ve got to be passionate about the process of English over the content of English. It isn’t enough to want to teach the “cool” stuff like The Hunger Games or Fahrenheit 451. It’s about what you’ll do when you have to teach Great Expectations to a class of apathetic high school juniors at 7:30am. Could you ask yourself—and have an answer for your students—the question of why are we doing this? Are you passionate enough about the process of thinking and writing analytically to do it, even when it’s a tough sell?

Because, for me, at the end of the day, it isn’t whether or not I’m teaching content I’m personally passionate about. It’s about whether or not I value the skills we learn and practice in “English class” enough to want to use a tool like Great Expectations to make my students better.

Why did you pursue a career in education?

I wanted to go into teaching because I truly believe that English class is the most valuable class my students will take.

Learning to reason through tough questions about a text is directly applicable to the problems and questions they will face in adulthood. One day they will be voters, mothers, husbands, managers, politicians, etc., and they will have to think critically, analytically, and carefully about some very big questions.

And my class is where they get to practice and hone their critical thinking skills before they get to that point (or, retroactively, because some of them are already there). Let’s have them start small by asking them how Beowulf represented the values of Anglo-Saxon culture before they need to ask themselves how a particular politician represents their values! 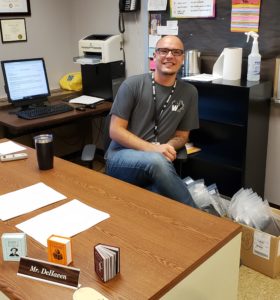 I handed a document to my students on the first day of school that I titled, “Why We’re Here,” and I’d like to share an excerpt I think illustrates my point:

“My job as your English teacher is to teach you how to analyze something to find out what it means, and to teach you to put that analysis into words… I will rarely expect you (quiz you) to know little facts and details about certain texts. What I do expect is for you to show me that you know how to analyze details in the text and make meaning from it.

Fiction writers (especially the ones we will encounter in this class) and their books, stories, and poems, are all “essays” in a sense—they are analyzing something around them and putting it into words. We will encounter the concept of paralysis in early 20th century Ireland, and come to learn what it meant to be in Ireland at that time through writers like James Joyce and W.B. Yeats. We will come to learn what early 20th century Ireland can tell us about our own country and the state it is in now. We, as a country, are asking ourselves the question (constantly, it seems): What does it mean to be an American? You will learn how studying British literature, in particular, coupled with your analytical thinking and writing skills can illuminate and inform our own world today.”

In my very first English class at BSU, ENG 230 with Dr. Collier, he told us that “humans are meaning-making animals,” and that stuck with me. I want to teach students how to make meaning out of the texts and ideas we talk about.

What would you say to someone who was nervous about becoming a teacher?

I think we get nervous because we’re afraid we will bomb or screw it all up. But, frankly, you’ll make more mistakes in your first year of teaching than you probably ever have in your life!

Embracing that will help you make those butterflies in your stomach fly in formation. Embrace that, and enjoy the chaos that will come. You’ll want to be hard on yourself, and you’ll need to embrace it when veteran teachers or mentor teachers tell you it’s alright, and that it will be okay.

No one’s expecting you to be teacher of the year, and we shouldn’t expect that of ourselves, particularly when we are just starting out. The kids will survive, and so will you. Best to enjoy the ride.

What is your favorite part of your day?

My favorite part of the day is actually part of the week, on Mondays, when I have students free write about their weekend. They can write as much or as little as they want, and I read every single one and ask each student about their weekend and what they wrote about. It takes about 20 minutes for me to do this, but it’s so worth it.

It’s a way for me to get to know them and build vital relationships. Just easing into the week is also good for them before we get to the classwork. It’s a small way to let them know that I care about them as individuals and that there is more to my class than reading Shakespeare.

I also get a kick out of what they write about—some of these kids are having a lot of fun and it shows. And, others are having a really tough time, and I feel honored that they are willing to share that with me. Some of them need even just a small outlet.