Songwriting is literature, as much as critics of a certain Nobel Prize recipient might argue. Although we usually consume songs by ear, their words can be just as artful and transporting as any poem or novel. Throughout the many genres of his career (from folk to jazz to blues to rock to avant guard to hip-hop), Tom Waits’ work has represented a pinnacle of creativity in songwriting. With a teeming arsenal of figures of speech, his words scrape the edges of imagination. Waits’ 1975 album Nighthawks at the Diner might not be his most mind-bending, but its writing is as absorbing as anything I’ve heard or read. 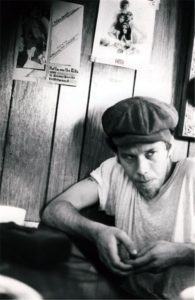 Since Nighthawks is a live album, almost every song has a preceding intro track, wherein Waits jokes and rambles to his chortling, glass-clinking audience. On “Opening Intro,” technically the first track, Waits lifts a figurative oil can to his listeners’ joints, loosening up their expectations, or perhaps their stiff shoulders from their respective days at work. Strutting alongside pulsating standup bass and saxophone accompaniment, Waits transitions seamlessly into the first real song on the album. “Emotional Weather Report” bursts like a cumulonimbus with imagery of “late night and early morning low clouds.” But it’s not until later the that the metaphors roll in to redefine the song:

For the areas including the western region of my mental health

And the northern portion of my ability to deal rationally

With my disconcerted precarious emotional situation”

His signature growl rumbles through each scene to grasp the real subject of the song: the narrator’s mental state. From this point on in Nighthawks, the audience (both the physical, live listeners in 1975 and the ones today with Mp3s or YouTube) know that they no longer inhabit the world that they once knew; with his words, Waits molds his own version of the universe. 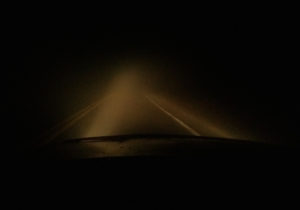 “It was kind of an abandoned road…”

The intro to the next song, “On a Foggy Night,” directly inserts the audience into this new realm, as Waits observes the kinds of cars they arrived in (“Subarus, Pintos, Malibus, Oldsmobiles”). With the tale of nocturnal automotive intrigue in the track proper, Waits showcases his gift for conjuring vivid, sometimes surreal imagery from familiar scenes. Punctuated by elastic guitar snaps, he places the listener in the driver’s seat on an abandoned road, “In a twilight mirror mirage,” “in a blurred brocade collage,” in desperate search for “a vacancy lodge.” Even listening today on headphones, it’s difficult not to see suspended mist creep onto the periphery of an ordinary bedroom or kitchen. 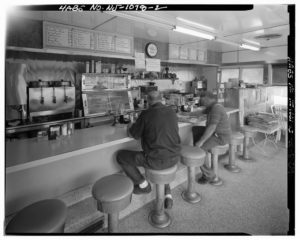 Waits unholsters another descriptive tool in the intro to the following track, “Eggs and Sausage (In a Cadillac with Susan Michelson)”: personification. He chronicles some unsavory episodes in his culinary history at diners, including a dangerous veal cutlet that left the plate, walked down the counter, and “tried to beat the shit of [his] cup of coffee.” Alas, the coffee “just wasn’t strong enough to defend itself.” This sudden animation of the food isn’t just meant to be humorous; it also continues Waits’ idea of taking the world familiar to the listener and making it new, weird, and special. The world of Nighthawks only grows bolder and more absorbing.

Another method Waits uses to unify Nighthawks is to repeat words and phrases central to the album’s themes. For instance, he fortifies the album’s preeminent urban nighttime setting with liberal sprinklings of the words “nocturnal” and “metropolitan.” Swizzle sticks, naugahyde, and double-knits also make several appearances. In addition, Waits re-uses some phrases like “smooth music on the stereo” in the intro to “On a Foggy Night” and on “Spare Parts I: A Nocturnal Emission.” By using such an oddly specific phrase in two different contexts (“Foggy” is lilted and paranoid, whereas “Spare Parts” swaggers), Waits subtly establishes a unity among the disparate corners of his created landscape. Similarly, he uses the word “jackknifed” to describe legs over a bar stool on “Putnam County” and to illustrate a truck wreck in “Big Joe and Phantom 309.” 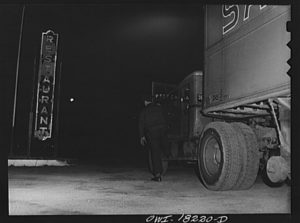 Nighthawks at the Diner is a distinctly American record, as Waits repeatedly names products (Velveeta, Campbell’s, Coca Cola, Pepto Bismol, etc.), car makes (Ford, GMC, Malibu, Oldsmobile, etc.), and other objects associated with the country to establish a skeleton for his own universe. The most fascinating way Waits invokes the feel of America is in his geographical variety. Befitting an album named after Edward Hopper’s hallowed American painting from 1942, a handful of songs capture night scenes in urban bars and diners (“Eggs and Sausage,” “Nighthawk Postcards [From Easy Street],” “Warm Beer and Cold Women,” “Spare Parts I,” and “Spare Parts II”). Other tunes nestle into the day-to-day life of small towns and suburbia (“Better Off Without a Wife” and “Putnam County”). Still others find themselves on the backroads, on the outskirts of the city and reality (“Foggy Night” and “Big Joe and Phantom 309”). Each section represents the whole in its own way. The whole grants each section its identity.

When the needle spills into the inner groove on Nighthawks, it feels like a long trip has ended. The paper yellowed, the edges torn, the landmarks pricked by red pushpins, Waits’ map lays out a sensitive American vision in and around the city. But rarely does he pinpoint the obvious details. Waits captures the perverse allure of the buzzing neon and naugahyde booths of nocturnal watering holes. He hangs his arm around youngsters who trick themselves into believing they’d rather stay out late than marry. He remembers where the kids’ lunch money resides (“it’s right over there on the draining board”). He embodies the campfire myth-making of America, telling ghost stories as he watches the orange embers scurry into the goosebump-raising nighttime breeze.

Waits empties his toolkit of storytelling techniques to draw upon the world listeners know and create a new one before their very ears. Like individual panels of a fresco, the 11 songs on Nighthawks (18 including intro tracks) interlock to create a whole more significant than the sum of their proverbial parts. As specific as it is sprawling, Tom Waits’ Nighthawks at the Diner is a spellbinding feat of creative writing.

You can enter this album right now on YouTube.