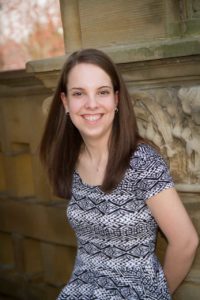 Rachel Haywood is a senior and Centennial Scholar at Ball State pursuing a BA in Creative Writing and a minor in Professional Writing and Emerging Media. From fall 2017 to spring 2018, she served as a prose editor for The Broken Plate. She is currently a Communications team member for Book Arts Collaborative. She is also a member of Sigma Tau Delta, the international English honor society here at Ball State. You can reach her at Rachel_Marie_96 (Twitter) for all things English and literary publishing related and at  rachel_haywood96 (Instagram) for the books that she binds and products she prints.

What made you become an English major, and what did you think you would get out of it?

From a very young age, I wanted to be a storyteller. I was convinced in middle school that I would go on to be an artist, and I went through the first three years of high school thinking that I was going to be a journalist. After working with The Broken Plate last year, I saw how much of positive impact the experience of editing and publishing was, so I started submitting my own work to literary magazines. From July to October, I have been or will be published in more than three magazines. In the end, I can see myself doing a number of jobs, but the ultimate goal is to work hard enough to make a difference in people’s lives.

What drew you to this immersive learning course?

I was originally drawn to this immersive learning course because I could be part of something much bigger than myself. I had heard of the magazine before, but I knew that this was a once in a lifetime opportunity to work in this capacity. I wanted to join the course because I did not have any previous ideas about what I wanted to do after graduation. This immersive learning course counts for more than just credit and I knew that if I made the decision to take the course myself that I would ultimately be open to the biggest challenge thus far in my education.

The basic goal of the Literary Editing and Publishing immersive learning course is to produce that year’s literary magazine. In more detail, the students learn the ins and outs of what it takes to publish a magazine, the history of books, and some teams learn how to use design software. As a prose editor, I was tasked with soliciting people’s writing and art, reading half of the prose submissions that came to the magazine, and voting on whether to accept it. Upon the completion of accepting work, the prose team worked together to copyedit what was going to go into the magazine. In the end, the entire staff worked together to put all the content into the publication and release it to the public.

What was a unique challenge you encountered during this course, and how did you overcome it?

One unique challenge that I encountered during this course was overcoming my own fear of trying something new. I hadn’t had too many jarring new experiences in my college education until taking this class, so I had to keep reminding myself that I was going to grow by the end of it. Since then, I decided to take the other immersive learning course, not because I was scared (like I was when I joined TBP) but because I wanted to throw myself into this new experience head-first. Bookbinding and working with printing presses seemed really intriguing to me after my junior year so I joined Book Arts Collaborative. I think the biggest thing I learned was that I am always going to have to do things that scare me, but it’s my choice whether to stay scared or take that experience and run with it. 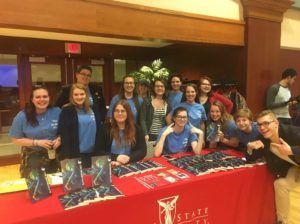 The Broken Plate Team at In Print Festival Spring 2018

What unique skills did you learn over the duration of this course?

In rather general terms, I learned how to better edit another person’s writing. I never considered myself very good at it, but over the course of the 9-month school year, I gained confidence in critiquing someone else’s writing to make it better. I had also never really worked on such a big project before with so many students, so the simple tasks of accelerated time management and team work were crucial for me to learn in the course.

What did you find most rewarding about the experience?

After completing the year with The Broken Plate, I was most appreciative of the final product, the published literary magazine. The fact that a group of 15 students worked together from start to finish on a project of this size is amazing. The school year came to a close in a reading and everyone who attended got a free copy of the magazine. Seeing the thing we worked so hard on go out into the world gave me a good feeling. The reader wouldn’t necessarily know how much work went into publishing the magazine, but it felt good to accomplish so much.

How has this immersive course helped you in internships or job seeking? 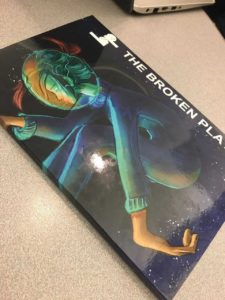 Spring 2018 Issue of The Broken Plate

I also opened myself up to considering a career in editing or publishing. I saw how positive the environment was in the classroom and really enjoyed working with the other students on such an influential project.

Learn more about The Broken Plate, Book Arts Collaborative, other immersive courses in the English Department.