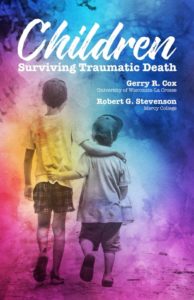 Gerry R. Cox is a Professor Emeritus of Sociology at University of Wisconsin- La Crosse. He was the Director of the Center for Death Education & Bioethics. His teaching focused upon Theory/Theory Construction, Deviance and Criminology, Death and Dying, Social Psychology, and Minority Peoples. Cox graduated with a B.A. in sociology with a minor in English in 1965 from Ball State. He earned an M.A. in sociology in 1966, and a Ph.D. in 1975.

He has been publishing materials since 1973 in sociology and teaching-oriented professional journals.

What was your first job after graduation?

Immediately after graduation, I flew to Philadelphia to start my Peace Corps training. It was an extremely fulfilling vocation. I would not call it a job. After returning from the Peace Corps, I chose not to go to law school, but rather began my career as a teacher.

What does a typical week look like for you?

I work on Habitat for Humanity projects several days a week. I mow for three to four hours at our Church. I write. I enjoy my grandchildren and children. I also travel extensively. I have been to forty-nine states and almost as many countries. I have authored and edited thirty books and have published poetry in a number of venues.

What was the most fulfilling part of your job?

Making a difference in people’s lives. I taught for forty-three years. I still hear from students about how I impacted their lives. I enjoyed the classroom, the colleagues, and the many activities involved in being on University campuses.

Do you have any advice for English majors who are trying to figure out the next step?

For me, it was doing what you love. I could have become a lawyer as was expected by my family, but I followed my heart and became a teacher and worked with the dying and bereaved

What are the most valuable skills you learned as an English major? How have they helped you post-graduation?

Probably the one that impacted me the most was a love for words. I think that the words opened up my ability to think and to appreciate life and the people in the world. I also learned how to write, though I do not consider myself to be a great writer. I think that the reason that I have been able to publish books is because I have something to say that is hopefully worth reading. I have also been fortunate to work with many of the leading people around the world in my field. Professors like Porter Nesbitt helped my appreciate my place in the world.