Prof. Deborah Mix’s Approaches to Teaching the Works of Gertrude Stein, co-edited with Logan Esdale of Chapman University, is finally in print! Order it now! 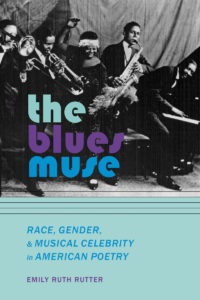 Prof. Molly Ferguson’s article, “‘To say no and no and no again’: Fasting girls, Shame, and Storytelling in Emma Donoghue’s The Wonder” was published in the Summer 2018 (vol 22:2) edition of New Hibernia Review.

Prof. Jill Christman had two essays published over the summer: “Naked Underneath Our Clothes” (Creative Nonfiction) &  “Life’s Not a Paragraph”(River Teeth). Spinning: A Love Story (a collection of essays) was a finalist for the 2018 Gournay Prize at The Ohio State University Press. She will be attending the NonfictioNow conference in Phoenix, Arizona next month to present on two panels: “Writing the Day” and “Our True Voice(s).” 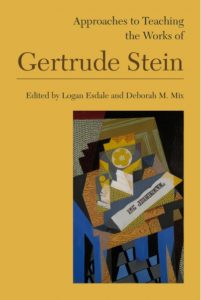 Prof. Rai Peterson will be the Banned Books Week “prisoner” at the Kurt Vonnegut Memorial Library during the last week of September.  While she is incarcerated in the front window of the Library, she will be meeting with visitors of the KVML, blogging on its website, and speaking at her release event on Saturday, September 29.

Prof. Gui Garcia gave a workshop on RMarkdown earlier this month in the Applied Statistics and R group (ASR) at Ball State. The group, which is now led by Dr. Garcia, is resuming its monthly meetings this fall. Look out for future dates and topics. Also earlier this month, Dr. Garcia gave a talk at the Montreal Symposium in honor of Lydia White, who created the field of Second Language Acquisition in the 1980s—and who just retired. Later this month, Dr. Garcia will present two papers at the 8th GALANA (Generative Approaches to Language Acquisition North America), a biennial meeting held at Indiana University (Bloomington) this year. Finally, he has recently published an online tutorial on his website on how to graphically explore vowels using the R language.

Prof. Katy Didden continues to explore the link between creative writing and the environment. This summer, she joined a team of artists, scientists, and scholars for a Banff Research in Culture residency titled Beyond Anthropocene at the Banff Centre for Creative Arts, where they brainstormed new “strategies of attention” for communicating about climate change. She recently led a “Trek and Talk” for Indiana Humanities’ Next Indiana Campfire Series on the theme of the White River, for which she selected poems for discussion and co-led two excursions on the Urban Wilderness Trail in Indianapolis. Finally, this month she collaborated with dancer and choreographer Rebecca Pappas for a residency on Governor’s Island sponsored by the artist collectives Underwater New York and Works on Water. Together, they composed a place-based, research-driven poem + dance on the theme of water, and staged it by the waterfront.

It has also been selected to screen at the following festivals:

Nuha Alsalem’s submission, ‘A Multimodal Analysis of Saudi Arabic Television Commercials,’ has been accepted for presentation at the 17th Annual Hawaii International Conference on Education, which will be held January 5-8, 2019 in Honolulu, Hawaii.

Vanessa Ford (B.A. in CW and Journalism, 2018) has accepted a full-time position with Coffey Communications as their assistant copy editor. Coffey creates custom publications and websites for healthcare companies across the country. She will be moving to Walla Walla, Washington and will be part of the publication services team.

Sarah James (CW and TCOM, 2018) is a Multimedia Specialist and Social Media Manager at Ohio Northern University. Feel free to find her on LinkedIn.

Melissa Jones (BA in CW 2018) has accepted a full-time position as a copywriter at Intersection Advertising Agency in Muncie, IN. She got started there with an internship that’s offered every spring. You can connect with her on LinkedIn.