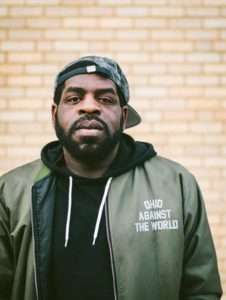 Poet and essayist Hanif Abdurraqib will be visiting Ball State University on Thursday, September 27th, 2018 from 7 – 9 p.m. in Teacher’s College (TC) 121.  This event, sponsored by the Ball State English Department, African-American Studies, the Multicultural Center, and the Office of Institutional Diversity, is free and open to the public.

A native of Columbus, OH, Hanif Abdurraqib is the author of The Crown Ain’t Worth Much, his first collection of poems; it was a finalist for the Eric Hoffer Book Prize, and was also nominated for a Hurston-Wright Legacy Award.

His collection of essays, They Can’t Kill Us Until They Kill Us, was named book of 2017 by Esquire, Buzzfeed, Oprah Magazine, NPR, and others.  It addresses many topics such as racial profiling, the n-word, and contemporary music and sports.

Not only does Abdurraqib write poetry and essays, he’s written for the 2016 live shows VH1’s Unsilent Night and MTV Video Music Awards.

Abdurraqib works as a poetry editor at Muzzle Magazine, an interviewer at Union Station Magazine, and for the poetry collective Echo Hotel.

If you’re interested in learning more about Hanif Abdurraqib, read some of his published works.

Reviews for “The Crown Ain’t Worth Much”

Here’s a taste of what you can expect for his poetry reading on the 27th!