Dear reader, I have something to ask you. I am taking the plunge and mentioning Finland, something I have avoided fastidiously for my 18+ years at Ball State so as not to get inaccurately and permanently categorized as being from Finland. If you could refrain from labeling me that way, I would be so thankful. My genetic material is from there, I have relatives there, and I have made an effort to know the language, but almost my entire life has taken place elsewhere. I have about the same amount of information about Finland as a casual tourist, and will live there one day only if my retirement plans go horribly wrong.

The rain on that July day in 2016 in Helsinki was unreasonably chilly. I took refuge in a trendy library and visited the restroom. After a glance around to check that no other library patrons were present to disapprove of my behavior, I set to studying the graffiti in the restroom. The spontaneous, unedited nature of graffiti –in restrooms or elsewhere– interests linguists, often offering insights on language change in progress, among other things.

An inscription written in a bold hand drew my eye: my name was in it. I’ll opt for euphemism in translating the strongly worded message: “Stick those darn kuha stories where the sun don’t shine”.

How had it come to this?

At some point in 2015, an anonymous genius had realized that a certain pun in Finnish was perfect for a meme. It begins with an ordinary, humorless sentence that fits this frame: “[positive outcome] so long as [condition]” – for example, “Everything is fine so long as you remember to enjoy life”. “So long as” in Finnish is “kunhan”. The fun begins when we replace “kunhan” with the shortened form  “kuha”, which is vernacular and therefore creates a mildly humorous contrast when inserted in profound statements. In addition, “kuha” also refers to a type of fish, the pike-perch. 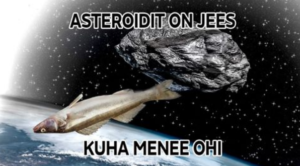 Kuha memes became ubiquitous. In October 2015 the vainkuhajutut Facebook page (consisting entirely of kuha memes) was established. Eventually it acquired more than 72,000 followers. The first half of the outcome-condition frame became optional; the visual elements of the meme make it funny merely to point out that “a pike-perch remembers to enjoy life”: 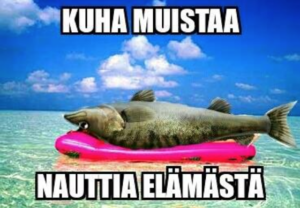 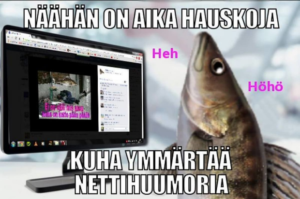 The meme evolved. The pike-perch became a humorous reference by itself, without the “good result/condition” frame; for example, people might tweet about buying pike-perch at the market. The meme also moved into the physical world. Instead of gingerbread houses, people made gingerbread pike-perches. They had mugs made with a pike-perch on them to point out that everything is fine because a pike-perch gets coffee. More than one group of students made signs in 2016 proclaiming “your grades don’t matter because a pike-perch graduates”: 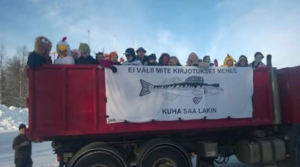 Apparently it all became too much. By mid-2016, some people were threatening “one more kuha joke and I’ll shove you.” 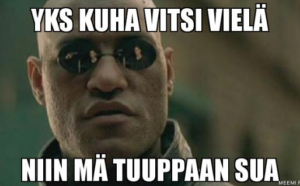 I loved the kuha memes. Being named after a fish is not the best thing ever, but for one glorious year the pike-perch was the hero of every story, saving the day by carrying out a range of improbable actions. It was good while it lasted.