Prof. Rani Crowe’s new film looks at what happens to a non-traditional family, comprised of four lesbian moms and a 15-year-old daughter, when it comes time to talk about sex. BSU student Tynan Drake reports on the film and Prof. Crowe’s vision of honest, helpful talk for young people on the verge of exploring their sexuality.

When 15-year-old Heather decides she is ready to lose her virginity, it is up to her four moms to decide how and when to give her ‘the talk.’ Mom Four is all on board for teaching Heather about sex, but first she must convince the other three moms that it is necessary. As the moms bicker amongst themselves, Heather moves forward with her decision only to discover that even a mature teenage g girl still needs her mothers. 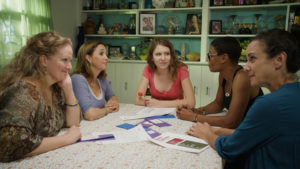 Crone Heights Productions’ short film, Heather Has Four Moms, was written and produced by BSU creative writing Prof. Rani Deighe Crowe, directed by her creative partner Jeanette L. Buck, and edited by Bonnie Rae Brickman. The film had its first screening at the Athens International Film and Video Festival in Athens, Ohio, on April 11. The production company’s mission is to put women in front of and behind the camera to produce the diverse stories that more commercial producers are not telling.

Heather Has Four Moms tells a contemporary, and so far largely untold, story about lesbian parenting, divorce, blending families, and raising teenagers. The film offers a welcome deviation from the typical depictions of LGBT individuals in film,  which tend to focus mainly on taboo love affairs, struggles with HIV, stigma, persecution, violence, and of course the coming-out story. Instead of centering the story on issues of prejudice and the feelings of shame it causes, Heather focuses on domestic life and the struggles any family might face, presenting a positive image of homosexual relationships and childrearing within an LGBT household.

Tessa Rooney, organizer of the Dyke Drama Film Festival in Perth, Australia, praised  Heather Has Four Moms for highlighting the rarely discussed issue of lesbian motherhood, which she said “has scant visibility” even in lesbian film. “Heather Has Four Moms so perfectly captures several threads at once–the reconstituted lesbian family, who is and who isn’t ‘really’ the mother, raising heterosexual children, and even just raising children, period,” she said.

The film responds to often inadequate sex education in American schools (and controversy about it). It speaks to the need for parents to communicate openly and respectfully with their children about consent, birth control, and other safe sex concerns that teenagers need to know as they inevitably begin to explore their sexuality.

In an interview, Prof. Crowe talked about the film’s emphasis on communication.

The alternative to open communication is setting children loose without guidance in a media landscape full of salacious and misleading images, she said.

“When young men aren’t talked to about consent at the age when they’re first discovering their sexuality, then they learn it from the internet, or the media, or from their peers when they get to college,” she said. “Adults seem to aspire to make everything G-rated, but the reality is the world is not G-rated. By expecting G-rated behavior and conversations, kids are being encouraged to keep to themselves more instead of reaching out with questions about their lives and their bodies.”

Film is an effective medium for addressing these issues because conflict is at the heart of film narratives, she said.

“Especially in film it’s about conflict, dramatic structure and storytelling; to shy away from the uncomfortable is not dramatic storytelling. You want to go to the places that are not comfortable and to explore that. The gift we have with plays, film, and television is the ability to go places we’re afraid to in real life.”

In the film, Heather’s mothers are forced to face their discomfort with her budding sexuality.

They struggle to decide how (or even if) they can talk to their daughter about sex. Although the mothers have fought for their own sexuality and control of their bodies, they struggle with finding a way to talk to Heather about sex, leaving viewers with a chaotic yet relatable conflict.

Heather Has Four Moms covers a variety of taboo topics within the confines of a short film, and Crowe believes it has a lot to offer. She recently submitted the script for a pilot episode of Heather Has Four Moms to the Sundance Institute Episodic Lab, a six-day program held at the Sundance Resort in Utah that helps writers develop their stories. During the lab, writers get to work alongside accomplished showrunners, producers, and other executives known in the film industry.

She recently learned that the pilot has made it to round two of the selection process, from which only 10 projects will be selected for the workshop. The final selection will be announced in early August.