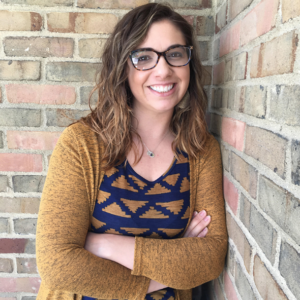 This week, the Ball State creative writing program will host its annual In Print Festival of First Books, a two-day event featuring a reading and panel discussion by writers who have just published their first books, as well as an editor from a small press or literary journal.

In anticipation of this event, we have prepared a series of blog posts highlighting each of our featured guests at the festival. Today we introduce you to editor Kristen Elias Rowley.

Kristen Elias Rowley completed her graduate work in literary studies at the University of Nebraska-Lincoln. She is Editor-in-Chief at The Ohio State University Press, where she acquires academic monographs, in addition to nonfiction, fiction, graphic novels/memoir, and poetry for the new literary trade imprint Mad Creek Books. Her acquisitions include Phillip Lopate’s A Mother’s Tale, Lina Maria Ferreira Cabeza-Vanegas’s Don’t Come Back, and Nicholas Delbanco’s Curiouser and Curiouser. She previously worked for the University of Nebraska Press, where she acquired such books as Barry Jean Borich’s Body Geographic (a LAMBDA Literary Award finalist), Ellen Cassedy’s We Are Here (a recipient of the Grub Street Prize), Joy Castro’s Island of Bones (which received an International Latino Book Award), and Nancy Miller’s What They Saved (winner of the Jewish Journal Book Prize). Other authors she has published include Lee Martin, Sue Williams Silverman, Patrick Madden, Mary Clearman Blew, Dan O’Brien, Ilan Stavans, David Lazar, Jared Carter, Catherine Taylor, and Joy Passanante.

Kristen will be joined at the 2018 In Print Festival of First Books by poet Carolina Ebeid, nonfiction writer Jan Shoemaker, and fiction writer Nick White.

All In Print events are free and open to the public. Contact Professor Neely at maneely@bsu.edu if you would like to sit in on his class.