Prof. Emily Rutter teaches African American literature and Prof. Pat Collier teaches film studies in the English Department. We brought them together for a conversation about Black Panther, which, just over a month after its debut, is the seventh highest-grossing film in U.S. history. 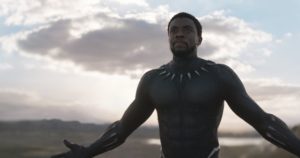 PC: Hi, Emily! Before we talk about the film itself, I’d like to hear your thoughts about the film as a cultural phenomenon. Black Panther is inspiring a lot of optimism from critics and journalists, who are reading its popularity as a sign (or an engine) of racial attitudes changing for the better. Do you share this optimism at all?

ER: Yes, Black Panther has generated an incredible amount of buzz, particularly in terms of the film’s “for us, by us” ethos. You could say that this film and its popularity are part of a black arts renaissance that has ushered in a stunning wave of black-directed films: Jordan Peele’s Get Out, Denzel Washington’s Fences (an adaptation of August Wilson’s Pulitzer Prize-winning play), Ava DuVernay’s 13th, and Barry Jenkins’s Moonlight (which won the 2017 Academy Award for Best Picture), and Black Panther Director Ryan Coogler’s own Fruitvale Station and Creed (and this is not an exhaustive list).

Historically, Hollywood is an industry that has not only been dominated by people of European descent, but has also been a key propagator of white-supremacist (and patriarchal, heteronormative, classist, ableist, what have you) ideologies. All of this to say that it’s positive both when white-dominated spaces like Hollywood are made less so, and when people of African descent are able to use the medium of film both to resist whitewashed narratives and to celebrate black pride. Thus, I hope that films like Black Panther, a high-grossing blockbuster which consistently conveys positive images of blackness, will become more common.

Pat, I’m curious as to your thoughts about the choice to represent Wakanda as a monarchy, rather than a democracy. While it was not specified, I also wondered if the implication was that this monarchy was patrilineal. In other words, if this is an Afrocentric film with anti-colonialist commitments, what are your thoughts on representing a king as the hero?

PC: Great question. Overall, I think the movie’s politics are progressive, at times even radical. I love it that racial oppression in the U.S. turns out to be, obliquely, to blame for the challenge to the Wakandan throne that drives the story. The villain Killmonger (played by the awesome Michael B. Jordan) raises the genuinely explosive question of whether it would be right for black people around the world to rise up violently. True, he’s the bad guy, but if his claim had no validity there would be nothing at stake. And the great thing about Black Panther is that, for all the glitzy CGI effects, its engagement in politics is serious. The movie ends (spoiler!) on a much more conciliatory note–Wakanda is now going to become an engine for social change through diplomacy and social programs. (Arch irony in Oakland, California being the beneficiary of foreign aid!)

But I digress. You asked about the creators’ choice to make Wakanda a monarchy, probably a patrilineal one, at that. (Not to take anything away from the female characters played by Lupita N’yongo, Danai Gurira and Letitia Wright, who kick much ass.) Maybe this is one place where Black Panther can’t transcend its Superhero source material. Its otherwise sophisticated sense of political conflict and global history resolves through old Superhero tropes, including lineal politics within royal families (Hello: Star Wars!) and hand-to-hand combat between larger-than-life individuals. Individual heroism and redemptive violence still carry the day.

What’s your take on the politics of the story, Emily? Much has been written, for instance, about the image of a powerful, functional African state at the center of the story.

ER: Right, and that symbolism is significant in terms of pressuring supposedly common sense ideas about the world, both past and present. Via Wakanda, Black Panther offers another way to see and know Africa that is not polluted by Western imperialist notions of civilized vs. primitive. Wakanda has preserved its rich resources–namely, vibranium–by operating under the guise of a “third-world” nation, outsmarting the colonizers by using their own prejudices against them. Taken as a whole, the film encourages viewers to question the ways in which nations (and indeed continents) are categorized and understood.

The film also poses several related questions: What is the most appropriate way to heal the African Diasporic wounds of the past by using the technologies of the present? How does a people threatened by exploitation preserve precious resources without denying them to people in need? We could also view these questions through the lens of art. For example, in beginning and ending the film in the director’s hometown of Oakland, Ryan Coogler might have been self-reflexively considering his own role as a now famous filmmaker. In other words, how will he resist becoming a stooge for, in this case, Disney, while also using his talents and platform to empower those caught in the crosshairs of various forms of structural oppression and violence?

Pat, what kinds of questions does the film raise for you regarding the role that these blockbuster films funded by corporate giants like Disney might play in resisting neo-colonial ways of knowing? Or, if that is too leading (ha ha), what are the other aspects of this film that intrigue you?

PC: Well, your question brings me back to the limits of the genre. I already mentioned that the superhero genre more or less stipulates that the conflict will be resolved by a strong individual through an act of redemptive violence. This is a very capitalist, western, individualist trope: it’s Shane taking down the cattle barons and Gary Cooper cleaning up Hadleyville. It’s also impossible for a film like Black Panther not to be a bit semi-colonial in its own right–serving up exoticized images of distant lands which the viewer gets to enjoy from the safe, commanding view of a (reclining!) theater seat. The power of Hollywood and of Disney to bring you these images is a powerful undercurrent that goes more or less unchallenged, don’t you think?

ER: Yes, that’s true. And, let me also say that for all my of my skepticism about Hollywood and Disney I recognize the importance of fantasies, especially in the form of utopic visions of Africa. In my African American literature class, we are gearing up for a unit about literary representations of Africa, so I’m excited to see the ways in which Black Panther informs our discussions. What about you, Pat? Do you plan to teach this film, or reference it in your film studies courses?

PC: You’re so right about fantasies. Film class for me is about recognizing what kinds of fantasies we’re being offered and how they work. And, sometimes, simply recognizing that they are fantasies. (I’m thinking about rom-coms and how they re-enforce middle-class and heteronormative values, and re-iterate the cultural narrative that pairing off solves all your problems). But, yes, I do think Black Panther would be a great film to teach, precisely because I want students to discern when film fantasies are potentially transformative, or liberating, or productively critical, and when they are re-enforcing harmful beliefs or simply promoting disengagement.