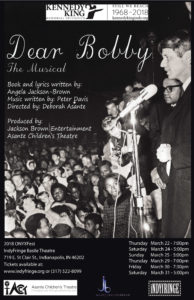 “Dear Bobby: A Musical,” written by BSU English professors Angela Jackson-Brown and Peter Davis, will debut on Thursday, March 22 at the IndyFringe Basile Theatre in Indianapolis. Prof. Jackson-Brown is the author of the novel Drinking from a Bitter Cup, the upcoming poetry collection House Repairs, and the plays Black Lives Matter (Too), Anna’s Wings, and It is Well, among other works. You can find more info about her work at www.angelajacksonbrown.com. Peter Davis is the author of four books of poetry, most recently Band Names and Other Poems. You can find more info about his work at artisnecessary.com.

PC: Your play tells the story of Bobby Kennedy’s speech in Indianapolis on the day of Martin Luther King’s assassination. Kennedy was discouraged from going on with the speech but insisted; it’s been suggested that his intervention may have prevented rioting in Indy.

Angela, how did you get selected to write this musical?

AJB: Most times when I write, the vision is 100% mine. In this instance, I was commissioned by the Kennedy King Memorial Initiative to write a play about Bobby Kennedy’s speech on April 4, 1968. That night, Kennedy had just finished giving a speech to over 10,000 Ball State University students (another wonderful connection to this story), so the historical component to this event was not lost on me. I strongly believe in serendipity and this felt like one of those moments.

James Still, the phenomenal playwright at the Indiana Repertory Theatre, produced a play about this event called April 4, 1968. I knew I wanted to do something totally different and out of the box, so I immediately thought, this story needs to be a musical. And because Pete and I had just completed writing a musical called Underneath the Chinaberry Tree, I knew we could do this project together. Our work ethic is so similar. We don’t procrastinate, and we are never so married to our work that we can’t listen. I don’t know if he and I will be the next Rodgers and Hammerstein, but I do know I would love to work on future projects with Pete. He gets me, and I believe, I get him too.

PC: Peter, you’re primarily a poet (though you’ve written a lot of songs). How is writing for a musical different from your previous work?

PD: I haven’t written music for a musical before working with Angela, but working on it wasn’t much different than working on other projects. No matter what I’m doing, I’m always working within a certain set of constraints, like the genre, or my abilities, or time, money, and access. Being an artist always feels like the same thing because the “art” part takes place regardless of (or inside of) the specific constraints.

PC: Creative writers spend a lot of time working alone, in complete control of their creations. What was it like working collaboratively?

PD: Working with Angela was great. It was super easy. She basically did everything. Angela secured funding for the both of us, wrote the play, wrote the lyrics, coordinated with the IndyFringe Theater, and even sang some of the melody for one of the songs.  Once she’d explained the project to me she gave me a file with lyrics for seven songs. All I had to do was to come up with the melodies. I’m constantly writing songs and so this felt like a vacation for me; half the songs were already done; I just had to fill in the music.

Of course, on some songs I had to tinker with the lyrics to fit a particular pattern or something, but Angela had already written the lyrics in a structure and so that job was mostly done. She gave them to me all at once and I just worked on whichever song I wanted to until I’d finally completed them. It was during the summer and so I sat at the piano in my living room and just messed around. It was pretty relaxing. It reminded me of the expression “many hands make light work.” Except in this case, it should be “Angela’s hands make light work.”

It was so easy working together that in the weeks prior to working on “Dear Bobby” we used roughly the same process to complete another musical, this one full of blues music. This play has yet to be produced, but my point is simply that working with Angela was easy and fun. I’d work with her on anything, anytime.

AJB: I love the art of collaboration and when I wear my playwriting hat, collaboration is imperative. Up until this project, my favorite collaboration was with BSU alum Ashya Thomas, who studied in our department. Ashya and I wrote Black Lives Matter (Too). This play received glowing reviews and was invited to two different festivals. Even though she was a student at the time, I respected her craft and her understanding of our subject matter.

The only way collaboration can work is if there is 100% trust between the collaborators. It is never one person’s vision. It might start out that way, but then, it becomes the vision of the director, the costumer, the sound and lighting designer, the scenic designer, and the actors (just to name a few). So, a playwright cannot afford to go into a theatrical writing project without considering the fact that there are many voices that must be heard if the project is going to go off without a hitch.

When it came to working on Dear Bobby, I was prepared to share the vision with Pete because more than anything, I trust him. This musical depended heavily on his musical vision and understanding of the historical time we were writing about. Pete asked all of the right questions, and then, we were off to the races, so to speak. Working with Pete was a dream. We never had to scrap a song because we just clicked so well artistically that we instinctively knew what was going to work. At times, it felt like he was inside my head (I hope he didn’t get scared up there.)

My goal as a teacher is to encourage other young writers to consider collaboration. Learning how to collaborate prepares young writers for that day when they hopefully sign with a literary agent. People may not realize it, but the agent and writer are collaborators. My agent, Alice Speilburg, is phenomenal when it comes to suggesting things I need to change or work on, and I know I have to be open to her suggestions. I have to trust that the people I put in my camp are there to make my work the best it can be.

Tickets for Dear Bobby: A Musical are available at http://www.indyfringe.org/theatre-show/dear-bobby-musical.