You are among Ball State’s most esteemed alumni. What are a few memories that stand out to you from your time here? 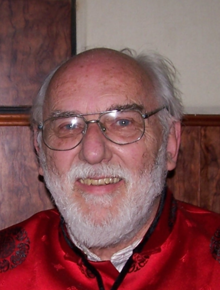 I was an undergraduate debater at BSU and president of the campus Newman Club. In 1978, BSU gave me an Outstanding Alumnus award. Several of my books are in the BSU library, as well as my MA thesis ‘’Solitude in the Works of Nathaniel Hawthorne,” (under the leadership of Alfred Harding Marks), and my Ph.D. thesis “A Rhetorical Analysis of the Speeches of Adlai Stevenson in the Fifteenth and Sixteenth Sessions of the United Nations General Assembly.”

When I was a teaching assistant at Ball State in 1958-59, I taught one quarter of American Literature and two quarters of public speaking (which included lots of vets who had fought in Korea). My supervisor was Lucille Clifton, and I had classes on Milton with Jon Loury as well as courses with Paul Royalty, Alfred Harding Marks, Joseph Sattler, and Edward Strother. The most interesting three quarter course that I took in the English Department was Shakespeare: in fall, histories; winter, the comedies; spring, the tragedies.

How has your career path progressed since earning your English degree?

I have taught 8,800 students in the US and Canada, 15 as a Fulbright professor in Swaziland, and 2,550 students in four Chinese universities. I have taught English and communication courses, either in English or communication and journalism departments in Chinese universities, and I even taught three years as a Latin teacher in a junior high school in Illinois. Overall, I have taught for 55 years, and I retired from teaching in China when I was 78. I would have liked to teach two more years, but I reluctantly aged out. In my 20 published books, I have emphasized classical and medieval rhetoric, the United Nations, intercultural and international communication and media, and China. My most recent books include my coedited Social Media in Asia from 2014, which received an outstanding coedited book award from the National Communication Association, and my autobiographical/autoethnographic book from 2015, A Journey to the East: Asia in Focus. Five of my books have also been published in China.

How did your education in English help you when working abroad?

In China, one of my most popular lectures in several different universities was “Great Western Literature: Homer, the Bible, and Shakespeare.” I had planned to develop a lecture on great American literature, but it did not develop. I taught American literature once to graduate students at Yangzhou University, and once at Beijing Language and Culture University. I taught haikus in different classes, and beginning at Beijing Language and Culture University, I had students in my advanced writing classes compose free-verse, 12-line poems, short plays, and short stories; I also had them edit a literary magazine in teams. I was co-author with a Chinese professor of an intercultural communication text, Communicating Interculturally, later published by Dignity Press as Chinese Communicating Interculturally. It includes 11 humorous cultural dialogues between an imaginary Professor Zhang, an imaginary class, and myself, plus a dozen short essays by my former Chinese students.

Having accomplished so much in your career now, how do you look back on your time as an English major at Ball State?

My five years at BSU (BA and MA) were a very happy time in my earlier life. I very much enjoyed being a student at BSU and being an English major. My time there was very good preparation for my later graduate study and life experiences, living an intercultural life, and teaching in the US, Canada, China, and Swaziland.