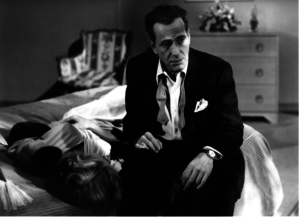 There are a whole lot of films, and great films at that, about screenwriting. A few of the best are Barton Fink (1991), written and directed by the Coen Brothers, and Adaptation. (2002), directed by Spike Jonze and written by Charlie Kaufman. However, few films I have ever seen are able to paint such a vivid and violent portrait of a screenwriting artist as the under-appreciated noir piece In a Lonely Place (1950), which was directed by Nicolas Ray, screenwritten by Andrew Solt, and adapted by Edmund H. North from a Dorothy B. Hughes story.

When this film opens, Hollywood screenwriter Dixon Steele (portrayed by Humphrey Bogart) is bitter and frustrated. He hasn’t had a hit in years and his latest assignment is to adapt a popular novel that Dix is sure is trash. Unwilling to read the bestseller himself, he has a celebrity-obsessed young woman relay the plot to him at his home. Soon after she leaves, she turns up dead and Dix strikes up a relationship with a sultry new neighbor who has doubts about his professed innocence in the case.

This film depicts the writer as an artist who strives to create something great in spite of his circumstances: the weak original novel, his agent who is afraid his superior script is not faithful enough to the book, and the murder accusation. Dix is volatile: he often gets publicly drunk and lashes out verbally and physically at friend and stranger alike. However, writing seems to give him an almost sexual sort of pleasure. For instance, when his police officer friend asks him how he supposes the murder would have happened, Dix describes in graphic detail how the strangling might have gone down, a sadistic grin splayed across his face. He revels in his own ability to imagine and create something so vivid and gruesome. He also gets inspiration from newfound love interest Laurel Gray, fueling the idea that physical/emotional pleasure and satisfactory writing go hand-in-hand for him. He relishes the ability to create with words, and being unproductive is the ultimate impotence for him.

Dix’s relationships to the women of the film also comment on the male-centric nature of the Hollywood screenwriting industry. For instance, Dix only interacts with the young woman at the beginning of the film, Mildred, played by Martha Stewart, in order to use her since he is too lazy to read the novel, and then she ends up dead. Whether or not Dix is being entirely truthful when he coolly receives the news of her murder from the police, his projected disregard for the woman is disturbing and reveals a sense of superiority over the woman.

Later, Dix finds contentment and inspiration to work when he becomes romantically involved with Laurel, played by Gloria Graham. Although Laurel does appear to genuinely care for Dix for a time, her fate is similar to that of young Laurel: Dix eventually decides she may no longer be useful to him. Only this time, he becomes violently protective and accuses her of betraying him. In the stunning final frames of this movie, which I not reveal, the fate of their relationship makes a statement about the gender politics at play: the man, traditionally in the position of power, is on a different plane.

In a Lonely Place also depicts the writer as a man who, though he relishes doing good work, projects an air of detached cool to most others.

One of my favorite bits in the film is when a friend chirps:

“I always wonder how writers work.”

His response: “Usually in a sitting position.”

In an earlier scene, a child asks him for his autograph outside a Hollywood bar. Only when the child admits he doesn’t know who Dix is does he happily oblige him. I can certainly relate to this strange dichotomy: having pride in one’s work, but also an unwillingness to brag about how good it might be. This might not be exclusive to writing, but the often-elusive nature of the writer does lend itself to this mindset.

Although I once again refuse to spoil the end of the film, I will say that it involves Dix’s hardheaded approach to his art. And in the end, his art proves to have been far more prescient than even he had imagined.

Although In a Lonely Place is chock full of searing dialogue, the most well-known quote is this:

“I was born when she kissed me. I died when she left me. I lived a few weeks while she loved me.”

This quote is multi-pronged: it is directed at Dix’s love interest, Laurel, but it also represents his obsession with his writing, the violence he has displayed toward her before, and the fleeting nature of inspiration in general. Somehow, this brilliant film manages to sum up in three sentences the passion, the romance, and the fatalism of the act of screenwriting, of writing as a whole, and of art.

Anthony Miglieri is a English Creative Writing major with minors in screenwriting and graphic arts. He is also the head web editor for on-campus entertainment news outlet The Reel Deal and an intern for Jacket Copy Creative. He also really likes old movies. You can connect with him here.