This year the English department hosted National Novel Writing Month (NaNoWriMo) events and encouraged writers in the Ball State and Muncie communities to write a rough draft of their novels. We called this the #MuncieNaNo Project.

Sixty-five writers participated, which is an 200+% increase in participants from previous years! 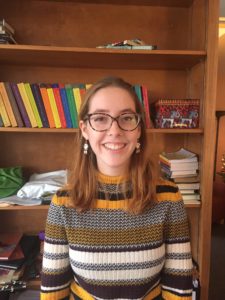 Ten participants “won,” which means that they wrote at least 50,000 words. Check out the leaderboard.

While not all 65 writers reached their goal of 50,000 words, they helped contribute to the group’s larger goal of collectively writing at least 1,000,000 words.

#MuncieNano writers generated 1,166,481 words. For many WriMos, making time write is an accomplishment in and of itself, and learning to make time to write is what NaNoWriMo is really about.

The first three people to reach 50,000 words were:

The person who generated the most words was Caleb Anthrop, who wrote 106,145 words–which was definitely going above and beyond the 50,000-word mark!

Caleb Anthrop lived most of his life in West Point, IN, on a small farm. He graduated from McCutcheon High School, Lafayette, IN, in 2006, enlisted in the United States Marine Corps in December, 2006, as a Computer Networking Specialist, and was honorably discharged in 2012. He served two tours to Iraq and Afghanistan. On June 10, 2014 he married his wife Brigit Calder. Also during 2014, he moved to Muncie that year to be closer to his wife’s job at the Rinker Center. Now, he spends his time playing video games, writing, cooking, and taking care of the house and his pup Finnegan. 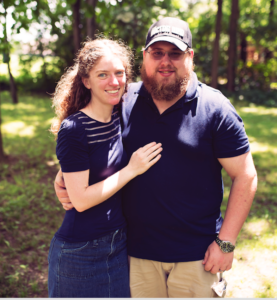 Audrey Bowers is a junior English education major and creative writing minor at Ball State University. This was her second year participating in NaNoWriMo. In her first attempt, she began strong on day one with a few thousand words and then ultimately quit by day two. In her second attempt, she felt determined and capable thanks to the #MuncieNano community, write-ins, and encouragement from other writers. She mostly carved out time to write in the mornings, waking up at around 5am or 6am on most days to write before class and work. 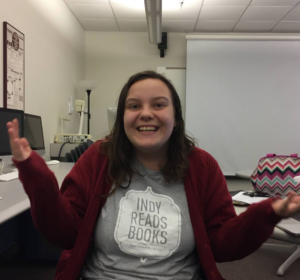 Keep Writing: NaNoWriMo may be over, but the NaNoWriMo spirit isn’t quite lost. It is never too late to start or continue writing your novel, as writing a novel isn’t something that can necessarily be done in a day, a week, a month, or a year in some cases. It is okay to take the time that you need to allow your story to develop in the way that it needs to. The important takeaway is to keep writing or to at least promise yourself to come back to it eventually.

He Promised! Silas Hansen will be performing “9 to 5” by Dolly Parton Wednesday, Dec. 13 at 6 PM in Room 291 of the Robert Bell building. This is to celebrate the fact that our #MuncieNano writers have written 1,000,000 words together. Everyone is welcome and encouraged to attend.

In order to stay connected or to become connected to the #MuncieNano community and to get prepared for #NaNoWriMo18, follow #MuncieNano on Twitter and join our Facebook group. This is where you will find community to support you as you begin or continue your novel.