“I have seen you before,” she said. 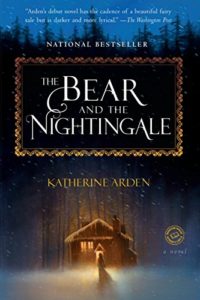 The Bear and the Nightingale by Katherine Arden is a fairy tale for adults. Arden takes all she learned from studying Russian Literature in Moscow, and weaves it into a magical, dangerous tale that will stick with readers for years to come.

At the edge of the Russian wilderness, young Vasya lives with her father, Dunya (her family’s nurse), and her older siblings Alyosha, Sasha, and Olya. However, Vasya is special because she can actually see the demons and spirits that to the others are just part of their cultural lore.

When her father returns from Moscow with a new, devout wife, and a new, persuasive priest for the village, the village’s soul is changed. Villagers start forgetting their long believed demons and spirits, and following this new, modern religion. Even Dunya forgets to leave offerings out for the domovi that lives under the counter in their kitchen. However, as the old ways are forgotten, a deadly winter is forthcoming on the town, as the Winter Demon, Medved, grows stronger. It will be up to Vasya to save her village.

“If Vasya heard voices on the wind, or saw faces in the leaves, she ignored them. Mostly. The vazila became the exception. He was a very simple creature. Like all household-spirits, he said, he had come into being when the stables were built and remembered nothing before. ”

Arden’s descriptions of the howling Russian winter will leave your nose and toes chilled – perfect to read under a warm blanket.

And, Lucky for readers, Vasya’s story isn’t over just yet. The Bear and the Nightingale’s sequel, The Girl in the Tower, comes out December 5th.