Jared Linder is a two-time Ball State graduate, once as undergrad with the English department, and again as a graduate student earning an M.S. in Information and Communication Sciences at the Center for Information and Communication Sciences (CICS). He serves as the Chief Information Officer for the State of Indiana’s Family and Social Services Administration and was recently named CTO of the year. You can connect with him on LinkedIn.

Most people would assume that a student who majored in English would never have a job as a Chief Information Officer. How did you move from English to a career in information technology?

When I graduated from Ball State in late 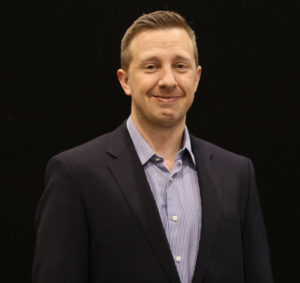 1998, the world was heavily focused on IT jobs, especially Y2K and the possible issues we would face if things did not go well. I honestly had a hard time finding a job. I did not really know what I was looking for, and had not prepared well for what my post-college life was supposed to look like.

I started a job working at the lowest rung at an IT company when soon someone realized I could write and communicate. That was when I became confident in my liberal arts background as a positive force for my success. I began to change my career mindset to focus on solving problems and helping people vs merely working in IT. That made all the difference; I just applied my learned skills to the reality of working in a 21st-century growth industry.

I used to tell my mom I worked around computers; now I tell her I help people get things done. I started to gravitate towards client relationships and working with project teams and management.

Over the last several years, I have served in both consulting and executive leadership roles, typically in the government space, focusing on making tough decisions and leading large IT endeavors. I crafted that path because, above all things, I am a critical thinker. They teach those skills in classes like 20th-century American literature more than they do in Math 400.

When I analyze my life and next steps, I find myself peering through Herman Hesse’s Siddhartha and Joseph Heller’s Catch 22. Those are special places to go that only English majors know about.

You earned your M.S. in Information and Communication Sciences at Ball State.  How did your B.A. in English studies help you develop skills that were useful to you as you pursued your master’s degree in a totally different field?  What was it like to be in graduate school in a technical field after earning an undergraduate English degree?

Note: I officially have a B.S. in English because I was a lazy 22-year-old and did not finish my language requirement. Which is nonsense because it was Latin—a skill at which I’m still semi-proficient.

Much like I had learned early in my career that there is a shortage of good communicators, I then realized that there might also be a shortage of credible expertise on my resume. I decided a more technical degree would help me to get a deeper understanding of the IT industry, hopefully introduce me to new people and their ideas, and help establish more credibility with colleagues and potential future employers.

I went back to Ball State for my M.S. when I was 30 years old, so I think the combination of a solid undergraduate degree and several years of work experience helped me triangulate what a successful graduate degree program could look like for me.

I chose to study at the CICS program at Ball State after meeting with the faculty and students and listening to their experiences and successes. For me they were a great fit. Change is always scary, but knowing that change will result in new possibilities is exciting. Get excited!

To any student I would offer further guidance that the skills you are learning in your English program will be foundational for any endeavor you choose to pursue. You are being provided a wonderful canvas on which to paint any picture you desire. Keep writing. Keep reading great books. Graduate and then read them all again. And then again.

What advice would you give to today’s English majors when they start to think about their careers after graduation?  What value do you see in the English degree in today’s technological and science-oriented world?

My primary advice to all job-seekers is this:

Start early, work on it diligently like a job, and never be caught flat-footed. The job market is pretty strong right now all across the country, and it continues to be a great time to have any type of technical leanings or desire to work in the IT space. But, do not focus on the IT or let that be a mental hindrance when pursuing places to work.

Think about how those companies have marketing and copy departments, business operations and management needs, and often are looking to introduce new talent into challenging areas.

Remember to reinforce your talents as a critical thinker and as a writer. Maybe though, show them instead of telling them. People love great examples of demonstrable output. Show them what you are capable of and why you are the person for the job.