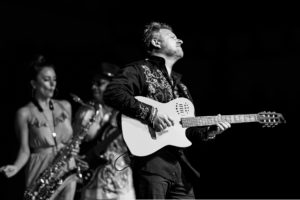 Bryan Lubeck graduated from Ball State University with a major in English in 1989.  He has gone on to hold executive marketing positions with several fortune 500 companies and to a successful career in music.

What drew you to BSU English?

Well I went to Ball State not quite knowing what I wanted to do. I had a music background.  My original plan was to be a singer/dancer, maybe a guitarist. I did come to Ball State with a guitar scholarship, a small one, but my main goal was to be in the University Singers. But then it sort of dawned on me that my classical guitar playing, singing, and music theatre were going nowhere. I thought maybe I would get a business degree and become a producer. 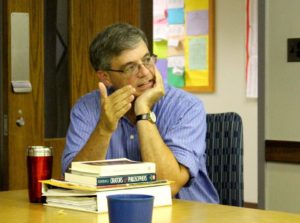 So I started taking humanities class from Paul Ranieri.  That opened up all kinds of flood gates for me. I thought “I still don’t want to teach.” I thought “This is really fascinating to me.”

I decided that I wanted to do some sort of business combo thing and at the time they had just created this program called the 3/2 program so you get your degree in your major in 3 years and your master’s in business in 2 years. But you overlap so you start business MBA classes your senior year.

I passed my GMAT and for this program you had to take either history or English.  And, to me, history is just like memorizing stuff and English is more creative, like learning how people think, so I went for that.  Really because of Paul Ranieri. I could not have picked a better combination. Creative but structured. I don’t feel like there are too many other majors where you have structure and creativity so perfectly blended.

How did your English degree lead to your career in marketing?

So I decided not to finish the business master’s degree.

Because A) I ran out of money and B) I felt like in the business classes, everybody there had been out in the real world. So I thought I should probably get some real world experience before I come back and finish the MBA. (Which I didn’t do, but that’s a different story).

I then applied to both Disney and SeaWorld in Orlando. I scored because of my performance experience at Ball State. The director at the time had Disney ties. My first interview at Disney was with the head of live entertainment. Not just the head of live entertainment at Disney in Orlando, but all of Disney. That was my first freaking interview! They said that they were basically ready to hire me, but the first war in Iraq had just started and there was a hiring freeze. So long story short, I ended up getting a job with a third–party entertainment company that worked with Disney and did tours across Europe. And that was perfect.  I had to know entertainment, which I did. I had to know business concepts, which I also did.

Then I was tasked with writing the brochures for this company. I didn’t really realize how unique my skill-set was because of my English degree.

Later I got hired to do sales for an internet company right when the internet started taking off. I was just in the right place with the right skill-set. No business people really knew anything about the internet. They just knew that they needed a website. They didn’t know what it would do for them. Literally I was meeting with people and selling them big internet connectivity and some of these CEOs didn’t even have computers on their desks.

My competition were IT guys with ponytails and Def-Leppard t-shirts, and I walk in with a suit and tie and I’m able to very succinctly articulate both in written and verbal forms, very specifically, how the internet was going to help their business. I was the only one in that area who understood how it was all going to work together. So I end up writing articles, radio ads, brochures, and running seminars.

And then I got hired by Microsoft.

So I was running marketing for a huge part of their business. I was having to articulate the materials in a way that people would want to read it. Without an English degree, I don’t know how you would do that. 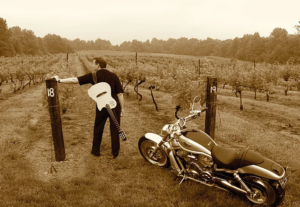 I ended up getting another job with a Fortune 500 company. And at the same time starting a music career.  The thing is, there are definitely better musicians than me. Sammy Davis Junior always said “There’s some kid in his basement way better than I am.” What got me out of my basement playing guitar was that I could sell and articulate my value vs. other musicians. And write my own press releases. I cannot imagine that I would be where I am in music or business if I was not able to be incredibly articulate. There are people whom I’ve worked with for eight years that I’ve never met in person and the only way that they know me is through me sending an email that is articulate, and they trust me because I don’t sound like an idiot.

How did you sell your English major to employers?

When I’m getting interviewed for a job that is in charge of marketing in the Americas for a Fortune 500 company, can you imagine who I’m up against? I’m up against people with pure business backgrounds, many of whom have MBAs.

When I was hired at Microsoft all that I had on my resume was that I was a sales guy at an internet company. But they were interviewing me for a marketing position, not a sales position. My tendency is to run at what I think people are going to doubt. Address that first. So rather than waiting for them to ask me “What about this English major?” I turn it immediately into an asset.

What benefits you in marketing isn’t knowing how you think. It’s about understanding how others think.

In what other degree program do you study how people think about stuff? Whether you’re marketing stuff or selling stuff, knowing how different people think is vital. You’ve got to be able to articulate things. I always treated my English degree as an asset. Anybody can get a marketing degree. What makes me different and better is that I’ve got this background and training that many other people cannot bring.

What does a typical day look like for you?

It’s probably better to talk about an average week.  In an average week 30%-40% of my time is spent on the phone.  There’s probably 20% of “Feet on the desk time.” I think that that is so important.  You’re never going to really be able to think about something clearly without taking some time to think about it deeply.  The rest of my week is “taking action.” That’s following up with people, booking gigs, launching campaigns.

What advice to you have for English majors?

You’ve got do something that you’re passionate about.

I think the key to being successful in life is three things that you don’t even need a major for.

Instantly that sets you above 80% of people in the world.

Now you’re fighting the other 20%.  What I have learned now, looking back, is that people do things with people that they like. And people that they know listen and understand them. And if you boil that down to a degree, if you ask me, that’s English. The lit degree helped me break down barriers so I could communicate and have good relationships with people. I have to be able to create an instant relationship with an audience or an employer. So, to me, the English degree is about understanding people and being able to create a relationship.