We’ve got a lot of good news this month!

Andrea Wolfe will be presenting a session entitled “Facing International Students: Building Empathy through Storytelling” with Lizz Alezetes and Deborah McMillan, both of the Intensive English Institute at Ball State, at the 2017 INTESOL Conference on November 11th

Molly Ferguson was elected president of the Midwest Regional American Conference for Irish Studies. On October 6th, she presented a paper, “‘To say no and no and no again’: Fasting as Resistance in Emma Donoghue’s The Wonder” at the Midwest ACIS at the University of Missouri.

Katy Didden’s essay “A Poetics of Tectonic Scale: The Great Distance Poems of Percy Bysshe Shelley, Marianne Moore, and Layli Long Soldier” was published by Poetry Northwest.  They also published her interview-style “double erasure” (a poem that engages with a historical text that critiques the naming of Mt. Rainier).

Jill Christman’s book Borrowed Babies has been adapted into a play by Ball State professor Jennifer Blackmer. This play will be produced at Ball State University in Spring 2019 in Strother Studio with Karen Kessler directing.

The ADE (Association of Departments of English) has invited Cathy Day to join Dr. Robert Matz (dean at George Mason) and present on “Reversing the Decline in English Majors and Enrollments” at the ADE workshop in Ann Arbor, MI July 9-12, 2018. 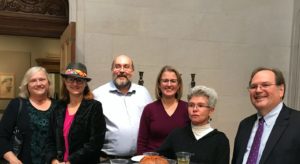 Pamela Hartman was honored at the CAEP/SPA Reception. This event honors the programs that received National SPA Recognition and the faculty who wrote the reports in preparation for the CAEP Accreditation Process.

Emily Rutter was selected to serve on the Editorial Board for Performing Celebrity, a new book series from the University of Delaware Press.

Darolyn “Lyn” Jones was invited to present on both flash memoir and telling the story of your life at the Indiana Author’s Fair, held annually in Indianapolis at Central Library in Indianapolis.

Joyce Huff presented a paper entitled “Digging Up the Past: British Victorian Constructions of the Corpse Trade in James Blake Bailey’s The Diary of a Resurrectionist (1898) and Robert Louis Stevenson’s ‘The Body Snatcher’ (1884)” at the Midwest Conference on British Studies on September 29, 2017. She had the honor of being on the panel with Ball State English graduate student, Anthony Salazar.

Mark Neely’s poem “Subvocal (3)” was published by Willow Springs in their summer issue. The poem also appears on their website along with a brief interview. He also had three minimalist poems appear in Juked. 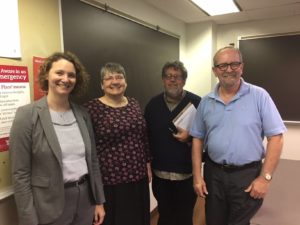 Emily Ford defended her dissertation, “BRING THEM INTO TRAINING”: EMBODYING THE VICTORIAN TEACHER.”

Anthony Salazar’s article “Curing the Vampire Disease with Transfusion: The Narrative Structure of Bram Stoker’s Dracula” was accepted for publication by English Language and Literature Studies.

Kelsey Englert (MA in English, 2014) had her flash fiction piece “Textbook Endings” published in Passages North. She was also featured in our Grad School Confidential series in 2015.

Nikole Darnell (Creative Writing, May 2017) accepted a position as the Editorial Production Coordinator at the Lebanon Reporter.

Do you have anything cool happening in November? We want to brag on you, #bsuenglish! Send us your November Good News at bsueng@bsu.edu!