How I Got to Ireland

Last year, I was in a Shakespeare class when a girl named Hayley came to talk about the opportunity to travel with a program called CAPA to Ireland the following summer. 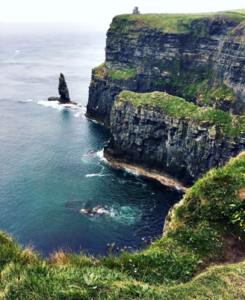 Having strong Irish heritage on both sides of my family, I’d heard so many stories about the country and have always wanted to go myself.

I sat there, entranced by stories of the Cliffs of Moher and incredibly green landscapes, and knew I wanted to have that experience.

Getting there took a lot of work – several scholarship applications and fundraising efforts — and there were times I thought I wouldn’t make it, but on May 14, 2017, I was on a plane headed to another country for the first time in my life.

I was a little nervous, but mostly excited as I stepped off the plane and onto Irish soil. It was raining and the city of Dublin was bustling on that early Monday morning. While there were some cultural differences, on the surface, Dublin looked not very much unlike Chicago or New York. I took in 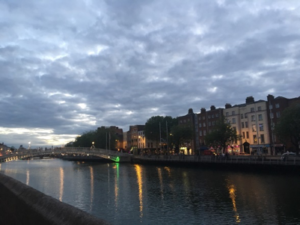 the sights around me and, though I knew I was thousands of miles from home, it didn’t feel like I was so far away.

My first day was a bit of a blur. We took a walking tour of the area, and met up with Hayley and two other women from CAPA, named Susanne and Caoimhe — her name is pronounced kwee-vah (in case you were wondering if the Irish language is phonetic, it’s not). They took us out to lunch and showed us Griffith College, where we would be studying for the next three weeks.

While on the outside, Dublin looks like a normal city – storefronts, pubs, bus stops, and trash littering the sidewalk – it’s not the outward appearance that makes Dublin so special. As I would learn throughout my time studying Irish literature and culture, much of Ireland’s, and particularly Dublin’s, history is buried – and some of it is hidden in plain sight.

Let’s start with the buried history. When Dublin was rebuilding and becoming more industrialized, Viking artifacts were found beneath the city. In fact, the city itself is built atop the River Liffey, which I passed every day and would have never known if a cab driver hadn’t told me. Then, there are the ever-famous Bog Bodies. Some of the perfectly mummified and preserved cadavers date back to the Iron Age and Ireland was home to three.

As for the history that is hidden in plain sight? One of my favorite examples of this is 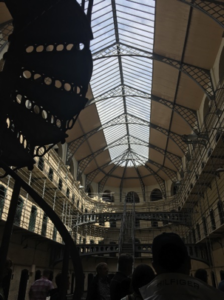 Kilmainham is Ireland’s oldest jail. It was built in 1796, but has been a museum since the 1970s, and is nestled in the city not far from famous landmarks like Phoenix Park and the Guinness Storehouse.

Tours for students cost 4 euro, but the goosebumps are free. My group went there on our second day and it’s difficult to describe the eerie feeling that accompanied us. The jail was a final destination for many political prisoners during Ireland’s fight for independence, namely after the Easter Rising of 1916. We were led into a chapel and told the story of Joseph Plunkett, who married the love of his life there only hours before he and many of his fellow rebels were executed in the yard just outside. As I walked through the halls of the jail, I was in awe. It’s a feeling that I’ll likely never forget.

I spent a lot of my trip awestruck. When I visited the Wicklow Mountains and stared across the valley, surrounded by nature; when I walked along the Cliffs of Moher in the pouring rain, feeling like I was at the edge of the world; when I fell in love with a new band – a group of buskers (or street musicians) called the Galway Street Club; when wandered among the books in the Long Room Library at Trinity College. 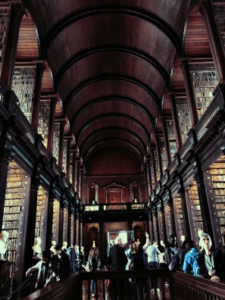 I learned so much about the island from where my ancestors hailed and that included some not-so-happy knowledge, such as Ireland’s blasphemy law and deeply seeded sexism.

At moments, I was simultaneously happy and disappointed. Since I had a lifelong dream of traveling to Ireland, I unrealistically expected it to be this magical land of perfection. And I think the most important thing I learned, is that nothing is. True, it was a magical place, with beautiful scenery and a deep, incredible history, but I learned that things aren’t always going to be just as you imagine them – in fact, they rarely are.

I learned that while I loved Ireland, it wasn’t some sort of utopia. But, there are people, like the author Sarah Maria Griffin (who we were lucky enough to meet), and Panti Bliss (who I wish I could have met). These people love Ireland and are working hard to make it more accepting of everyone and not just the white, male majority.

I learned that the negative laws and customs don’t represent everyone there and that while Ireland was different than I expected, I’ll always be glad I went.

Why You Should Go Abroad, Too 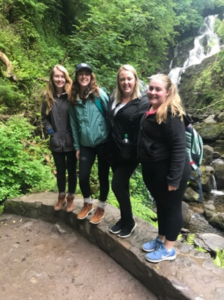 I experienced so much in three weeks, and living in another country – even for just a short time – is something that I would recommend to everyone. I learned so much about myself – my ability to be financially savvy when it comes to quite literally backpacking across another country, to navigate a place that’s completely foreign to me, to feel at home thousands of miles away from the comfort of my own, and to consume uncanny amounts of potatoes and Guinness.

I, mentally and physically, exerted myself more in those three weeks than I probably have throughout my entire time in college. Whether it was hiking through Killarney National Park, or learning about fairies and famines, there was always a new challenge. A grand (the Irish love the word grand), self-developing challenge. I came out of my experience in Ireland, knowing that there’s always a new place to explore and a new adventure to be had and no matter the challenges that come with those adventures, whether that’s in the job market, or in my personal life, if I can (mostly) figure out the Dublin bus system, I can (mostly) handle anything. 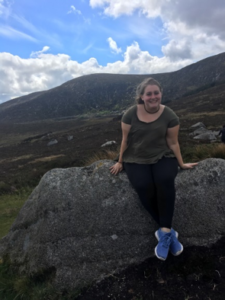 Studying abroad is an opportunity of a lifetime, no matter where you go and no matter for how long.

It’s an incredible learning experience that comes with self-discovery, a lot of fun, and it’s one that I hope more college students take part in.

Here’s how you can start!