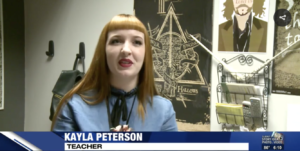 Kayla Peterson (BA in English Ed, 2016) is an English teacher at Penn High School in Mishawaka, IN. She was recently featured on WNDU News for transforming her classroom into Hogwarts.

Check out the other awesome things #bsuenglish students and faculty have been up to!

Kathryn S. Gardiner is a “Second Rounder” in the Austin Film Festival’s annual script competition for 2017. Second Round scripts represent the top 20% of all submissions. Kathryn also submitted two feature-length screenplays to the contest—“The Art of Yielding” and “The Regiment”. Both scripts advanced to the second round. Second Rounders receive access to exclusive panels and roundtables with industry professionals at the Austin, Texas conference in October. “The Art of Yielding” is also a quarter-finalist in the 2017 Slamdance Screenplay Competition. 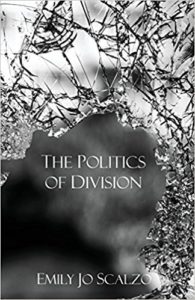 Emily Jo Scalzo was interviewed by her MFA program at Fresno State about her first book, The Politics of Division. The interview was published on the program’s blog on September 18th as part of their “On the Books” series celebrating MFA alumni first books. Additionally, her poem “Sans Regulations” was accepted for publication in Eleventh Transmission as a part of Wax Poetry and Art’s 45 Poems: Reflection & Response project.

Rani Deighe Crowe has also been doing some great work in film. Her short film, Beautiful Eyes, will screen in Innsbruck, Austria as part of the Final Girls Women in Horror “Best of” screening on October 6.  Beautiful Eyes will also screen in San Antonio as part of the Creeper Film Festival, September 30. Texting: A Love Story will screen in the Bull City International Film Festival in Durham, NC on Feb 3, 2018. Her screenplay, Heather Has Four Moms, is also a finalist for the TeaDance Gay and Lesbian Film Festival, October 14.

Brian Morrison has art and poetry forthcoming as online content on Slippery Elm Literary Journal and a poem forthcoming in Bear Review.

Katy Didden accepted a publishing offer for “A Poetics of Tectonic Scale: the Great Distance Poem,” from Poetry Northwest. She also plans to have it reprinted in the forthcoming anthology The Poem’s Country: Place and Poetic Practice in 2018.

Silas Hansen’s essay, “What Real Men Do” (published in The Normal School’s Fall 2016 issue) was listed as a Notable Essay in the 2017 edition of Best American Essays. The essay is also forthcoming in the 9th edition of The Writer’s Presence: A Pool of Readings, to be published by Bedford/St. Martin’s Press in January 2018.

Michael Begnal has a poem in Thinking Continental: Writing the Planet One Place at a Time (University of Nebraska Press), a multigenre, multidisciplinary ecocritical anthology. He also has six new poems published at Empty Mirror, a journal of surrealist and post-Beat literature. In addition, Begnal has two spoken-word tracks in the Ghost City Tapes, Volume 1, curated by Ghost City Press.

Charlie Cain is interning at the Indiana Writers Center, and is building a website for the podcast, “Uncle Dan’s Book Nerds” for Indiana writer Dan Wakefield.

Elisabeth Buck (Phd in Rhetoric and Composition, 2016) is publishing her monograph Open-Access, Multimodality, and Writing Center Studies through Palgrave Macmillan.

Brittany Ullman (BA in CW, 2017) is working as a marketing copywriter for IFD in Richmond, IN.

Lauren Cross (BA in CW, 2017) is working as a classroom aide for Burris Laboratory School in Muncie, IN.

Jenna Wilson (BA in CW 2017) took a job as District Supervisor at the Bend Bulletin, which looks after the delivery routes and those who run them.

Are you doing anything special in October? We want to brag on you, #bsuenglish! Send us your October Good News at bsueng@bsu.edu!