Ben Bascom, a specialist in early and nineteenth-century American literature, comes to the English Department from the University of Illinois at Urbana-Champaign, where he recently finished a dissertation on early U.S. life writings. His research and teaching combine a queer studies approach with material text methodologies to reimagine the relation between archive and canon. His scholarship has appeared in Early American Literature and is forthcoming in Common-Place: The Journal of Early American Life. 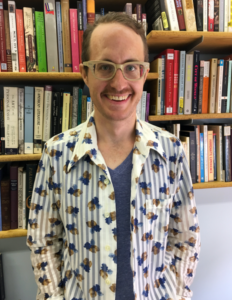 How would you describe your perspective on teaching?

I would describe my teaching as messily Socratic. I try to frame class with a series of questions or provocations that encourage students to engage with the reading material at a variety of levels. Since I teach a lot of material that feels remote to most students—from seventeenth-century sermons to nineteenth-century picaresque novels—I first urge students to understand the complex and unfamiliar language before they levy a critique about what they find as the text’s limitations. I discover myself being drawn to think with students about their experiences reading particular texts—beginning, perhaps, with whether something was pleasurable or difficult, easy or frustrating to read—to then prompt them to think about how their expectations, experiences, and interests influence them to consider certain texts as being more intellectually available or compelling than others.

When are your office hours?

My office hours are on Wednesdays from 12:15pm to 2:45pm, or by appointment at students’ availabilities.

What are you currently reading, if anything?

I currently have scattered about my office and apartment an assortment of books that I’m reading. For the courses I’m teaching this semester, I’m at the moment rereading Henry David Thoreau’s Walden and an eighteenth-century epistolary novel titled The Coquette by Hannah Webster Foster. I also just started Laura Dassow Walls’s new biography of Thoreau and recently began Roxane Gay’s Hunger: A Memoir of (My) Body. I find that when the evening rolls around I turn to books of poetry, and some volumes that I really love to return to are Kimberly Johnson’s A Metaphorical God, the collected works of Gerard Manley Hopkins, Red Pine’s In Such Hard Times: The Poetry of Wei Ying-wu, and Claudia Rankine’s Citizen: An American Lyric.

What is a text that you think everyone should read?

I think everyone should write their own commonplace books that record their spare thoughts and fleeting ideas, and that they keep just for an audience of themselves to peruse periodically. So, I guess I’d say that everyone should read a text that they create, one that remains an ongoing project, whether that be a diary or a journal or a notebook of commonplace thoughts. When I was finishing my PhD I carried around with me a little notebook where I would write quick observations, or make small annotations about my thoughts, that I would then read over at moments of discouragement or at times when I struggled through a particularly difficult writing project. I think one can return to these types of writings to gain perspective and a fresh sense of personal reflection.

Are you working on any projects at the moment?

I’m currently working on two projects: one stems from my recently completed dissertation and argues that non-normative masculinities in the early United States co-constituted the norms of republican belonging. I do that through looking at life-narrative writings from a series of individuals who could be considered early national failures. The second project is an essay that will become the nucleus to a project that examines the figments of queer desire that inhere in the posthumous reception of major figures of nineteenth-century American literature. In the essay, I trace out the types of melancholic longing that Poe and Dickinson produce in their lyric poetry, and how that melancholia is very much a part of how their editors presented their posthumous works. The tentative title for that essay is “Lonely, Lonely Annabel Lee: Queer Melancholia from Poe to Dickinson.”

What are some of your hobbies or interests?

I absolutely love to go on long, rambling walks or bike rides right as the sun prepares to descend—the light is just so beautiful then, especially here in the Midwest. The Cardinal Greenway is a particularly good place to ride a bike. I also have a bit of a hobby with houseplants, from succulents to various types of pothos. If you come to my office during office hours you’ll find a little forest of small plants resting on a shelf below my books.