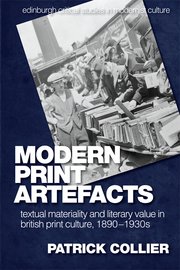 This August brings us so much good news. Let’s start…

Prof. Patrick Collier’s book Modern Print Artefacts: Textual Materiality and Literary Value in British Print Culture, 1890–1930s (Edinburgh University Press) was a finalist for the Modernist Studies Association Book Prize. A panel of judges determined the book that made the most significant contribution to modernist studies.

Back in 2010, Naomi Lancaster, an alum of our MA in Linguistics program, wrote her thesis titled “A corpus study of email writing in a business setting and its practical application in teaching English as a second language” with the help of Prof. Elizabeth Riddle. Because of this, the Ball State English Department got a shout out in a recent New Yorker article about digital humanities!

Prof. Michael Begnal’s article “Modernist Mythologies: The Turquoise Trail Anthology and the Poets of Santa Fe” was accepted for publication in Western American Literature and is scheduled for 2018. In late June, Begnal participated in the Association for the Study of Literature and Environment (ASLE) conference in Detroit. While there, he read and discussed one of his poems as part of a panel on the forthcoming anthology Thinking Continental: Writing the Planet One Place at a Time (University of Nebraska Press, 2017).

Prof. Susanna Benko, along with her colleagues Professor Serena Salloum and Professor Emily Hodge, are continuing to research ways states provide resources for English teachers around college and career ready standards. Their research on this topic, published last year in AERA Open, was featured in the Education Week blog Curriculum Matters. They also published a blog post about their work through the Center on Standards, Alignment, Instruction, and Learning at the University of Pennsylvania. This summer, Professors Benko, Hodge, and Salloum published a policy brief with the Consortium on Policy Research in Education that describes the implications of their work for state policymakers. Finally, they published an article in Kappa Delta Pi Record that advises teachers and educational leaders on resource selection.

The Indiana Writing Project, directed by Professor Benko, brings us good news regarding a productive summer. In June, IWP held their annual Composition Camp. In addition, this summer, Professor Benko and 13 middle and secondary English teachers met for an Advanced Institute to study argument writing and curricular materials from the National Writing Project’s College, Career, and Community Writing Program (C3WP). The institute was sponsored as part of a grant that IWP was awarded from NWP. Teachers who participated in the institute will be implementing C3WP materials in their classrooms over the 2017-2018 school year.

Prof. Jill Christman’s essay “Three Takes on a Jump” was published along with an interview in a textbook edited by Jen Hirt and Tina Mitchell, Kept Secret: The Half-Truth in Nonfiction. Also, a new long-form essay has been accepted for publication in the new single-author journal produced by Creative Nonfiction; Professor Christman’s True Story, “Spinning: Against the Rules of Angels,” will be released this September (Issue 12). Another new essay, “Life’s Not a Paragraph,” will appear in the spring issue of River Teeth.

Professor Rani Deighe Crowe presented “Diversity, Representation, and the Empathy Gap” at the University Film and Video Association Conference in Los Angeles. Her presentation looks at how lack of diversity in film and media also harms overrepresented populations. She notes how lack of diversity causes a failure to stimulate and develop the brain’s empathy circuit. Also, the TeaDance Gay and Lesbian Film Festival featured her short film, Heather has Four Moms, as a finalist. Rani produced the SAG short film in July. Directed by Jeanette Buck, it stars acclaimed Washington DC actress Holly Twyford and will be edited by award-winning editor Bonnie Rae Brickman.

The article “Clowning as Human Rights Activism in Recent Devised Irish Theatre” by Professor Molly Ferguson was published in Studi Irlandesi: A Journal of Irish Studies, in their special edition on “Resistance in Modern Ireland.” On June 2nd in Ireland, she hosted a post-performance Q&A session for “A Sacrilegious Lesbian and Homosexual Parade” with playwright Brian Fleming at K-fest in Killorglin.

Professor Silas Hansen had an essay published in Redivider 14.2 (Spring/Summer 2017). He also participated in a discussion about creative writing pedagogy at the 2017 NonfictioNow Conference in Reykjavik, Iceland in June. He had two panels accepted for the 2018 Association of Writers and Writing Programs Conference in Tampa, FL. One was on building literary community outside of large cities, and the other on innovative teaching practices and moving away from the workshop model in creative nonfiction writing classes.

In May 2017, Professor Emily Rutter signed a publishing contract with University of Alabama Press for her new book. Constructions of the Blues Muse in Twentieth- and Twenty-First-Century American Poetry will be in print starting Fall 2018. In June, Rutter presented “Archives of Feeling in August Wilson’s Fences and Denzel Washington’s Filmic Adaptation”. This paper drew from her second book project at the Sports Literature Conference at West Liberty University.

Professor Emily Jo Scalzo has been invited to participate in the 2017 Indy Author Fair at “Meet an Author, Be an Author,” presented by the Indianapolis Public Library and the Eugene & Marilyn Glick Indiana Authors Award. The event will occur on Saturday, October 14, 2017 from 11am to 1pm. In addition, her poetry chapbook, The Politics of Division, will be for sale at the event.

Alyssa Huckaby, a senior education student with a creative writing minor, received a 2017 Excellence in Summer Service Education Award. There were 76 applicants from 49 programs for 25 awards.  Alyssa will be recognized by major funders with the Summer Youth Program Fund at an Indianapolis event on September 22.  Alyssa received a $1,000 scholarship for her award.

Undergraduate student Levi Todd saw his panel “Slam Academy: The Importance of Spoken Word in Poetry Curricula” accepted at the AWP18 conference in Tampa, FL. Note: the acceptance rate for panels at this conference is only about 35%. Levi is the founder of Reacting Out Loud, an independent organization uplifting poetry in the Muncie community.