John Maust is president of Media Associates International (MAI), a publishing training agency based near Chicago, Illinois. John directs MAI’s global training programs to strengthen Christian publishing worldwide and to foster the development and publication of gifted local writers. John became president of MAI in 1998 after more than 20 years of experience as an editor, author and journalist. He graduated from Ball State University in 1975 with a B.A. in Literature, followed by an M.A. in Communications from Wheaton (IL) College Graduate School in 1978.

You have had such a varied career in publishing, including working for a newspaper and a magazine, as well as publishing three books of your own. In what ways did your English literature degree help to prepare you for these various endeavors? 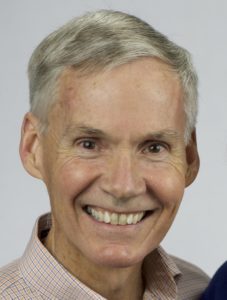 Within weeks of graduating from Ball State, I got a job as a 20-year-old editor of a small-town weekly newspaper in nearby Dunkirk, Indiana. Editorially, it was a one-person operation. So, for the first time in my life I had nightmares: would I find enough to fill the newspaper?

Fortunately, we never published any blank pages, and the work got done through long hours, hard work, a finely tooled typewriter, and more than a few prayers. I look at that experience as a time of real growth both as a person and as a communicator. They say you learn to write by writing, and that was surely the case at this newspaper.

Next came graduate school, followed by work as a magazine news editor, and then as a roving reporter and writer trainer based in Lima, Peru. There, this English major learned enough Spanish to meet and marry my beautiful wife, Elsa, of 32 years.

For the last 20 years, I’ve been helping to equip and encourage Christian publishers and writers in the Majority World as president of Media Associates International.

My English degree helped prepare me for all this simply through the act of reading—reading widely from the best authors and doing so critically. Almost unconsciously, one
begins to absorb and understand the difference between good and not-so-good writing and literature—skills needed by any editor.

Similarly, I began to learn there’s a wide chasm between the almost right word and the right word—as Mark Twain quipped, “it’s the difference between the lightning bug and lightning.” It’s hard work,  crafting words to say exactly what you mean.

Finally, I learned about the skill required for boiling down an immense amount of information and ideas into a concise piece held together by a unifying theme that could be expressed in one sentence. Readers want us to write clearly and concisely.

You are now the President of MAI, a non-profit organization dedicated to helping authors around the world to write and publish Christian literature for their local audiences and communities. Why did you move into the world of non-profit administration, and how do your writing and communication skills come into play in your current job?

I didn’t go looking for work in non-profit administration. It came as a surprise. When
the founding president of Media Associates International began making plans to retire, he invited me to succeed him. And here I am after 19 years. It’s encouraging to look back at the bits and pieces of my life—including the years at Ball State—and to see how God put them together into what I’m doing now.

Today, instead of books and articles, I’m writing more grant proposals, Board reports and emails. Not so exciting perhaps. But I face the same need to write clearly and concisely, and maybe even more creativity is required to keep these reports from being deadly boring.

In my work, I have the privilege of interacting with gifted men and women who are creating excellent “homegrown” content for readers in places like South Sudan, Laos, Peru, Bulgaria and the Democratic Republic of Congo. Helping these friends write and publish stories that would not otherwise have been told is a bit like uncovering buried treasure.

By the way, I vividly remember my Ball State course on “The Modern Continental Novel” because it exposed me for the first time to the (translated) work of international authors and the world of words outside American and British borders.

As someone who has worked in writing and publishing for nearly 40 years, what advice would you have for current English majors who are worried about their future employment prospects? What can English majors do now to prepare for future success?

To be effective in the workplace, you need to be an effective communicator—both spoken and written. An English major is better equipped than most in this regard.

Employers in business, mass media, education, social services and other fields will value your English-major skills to think critically and creatively and to express yourself clearly.

Through reading of fiction and nonfiction, you are also developing a greater sense of empathy for others, plus a broader worldview and a sense of how ideas shape culture and history. In this way, I think that being an English major makes you a better person by giving you valuable tools both for work and for life.

If you are thinking about work in publishing or writing, there is no better major than English Literature. Both now and in the future, keep on reading, and keep on writing. It’s a corny saying but true: “To write good readin’, you need to read good writin’.”

An awful lot of people in our world live without hope. Your published and spoken words, hammered into shape with faith and hard work, can shine a ray of hope and leave a legacy for future generations.